It's a Small World After All

In the weeks after 9/11, Aisha Bailey worked at the New York City medical examiner’s office. “I would go to autopsies all day,” she says, “and when that got to be too stressful, I needed some sort of artistic channel.” That need for an outlet ultimately led Bailey, now a pediatrician in New Jersey, to a second career as designer and CEO of a line of dolls called Ishababies, which draw their name from her childhood nickname, Isha. 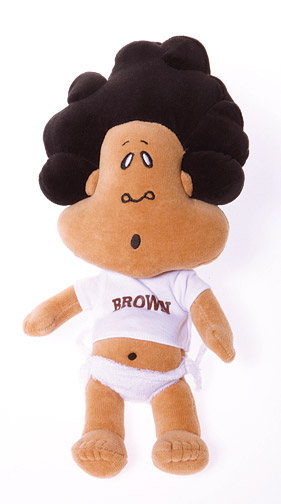 Since college, Bailey had been drawing cartoons for friends’ birthday cards, and while in New York she created a line of baby-announcement and gift cards. Her mother, Bernicestine Bailey ’68, had been attending toy shows for years and was discouraged by the lack of diversity among dolls. “When I decided I wanted to create a companion for little people,” Aisha says, “Mom got me into a toy fair.” They connected with a manufacturer in China who took Aisha’s drawings and translated them into ten-inch-tall cotton plush dolls. Since Aisha was training for her Doctor of Osteopathic Medicine degree, her mother and father, trustee emeritus Harold Bailey ’70, helped run the company.

Instead of identifying her dolls by race or ethnicity, Aisha named them by “flavor.” “I wanted them to be scrumptious and edible,” she says. First came Turbinado Boy and Girl, then Coco, Caramel, Peach, and Marigold. Ishababies now come in eight flavors, each with a distinctive set of interests—Coco Boy’s a geologist, for instance, and Poppy Girl’s an Olympic athlete.

Aisha says the most moving moment in her dolls’ creation was seeing Mocha Girl, a dark-chocolate colored diva with irresistibly soft Afro-puffs. Harold Bailey—who, like his wife and daughter, is African American—told Aisha that Mocha’s skin color was too dark to sell, but she persisted. “When I saw the first prototypes, I was in tears,” she says.

Public response to the dolls speaks volumes about the ways children and adults see difference. “Adults may say, ‘I want the Asian doll,’ but a child will say, ‘that one looks like so-and-so down the street,’” Aisha observes. “Kids want to be with kids who like the same things they do.”

Still, the pediatrician in Bailey comes out when she talks about the therapeutic role her dolls can play in boosting children’s confidence. She tells the story of one of her patients, an eight-year-old boy who lived in a mostly white neighborhood with his white dad and black mom. Receiving a Caramel Boy doll, he was thrilled. He carried it everywhere, Bailey says: “He said, ‘It looks like me!’ and he started speaking up more in class.”

Reader Responses to It's a Small World After All