If there were an Academy Award for modesty, the winner would almost surely be Associate Professor of History Michael Vorenberg. His 2001 book, Final Freedom: The Civil War, the Abolition of Slavery, and the Thirteenth Amendment, is considered the definitive account of the passage of the Thirteenth Amendment to the Constitution, ending slavery. Is it also the book from which the film Lincoln was adapted? 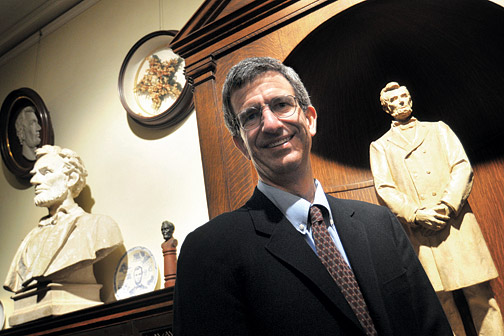 Frank Mullin
"I just don't see," Vorenberg says, "how it's viable for the creators of any film to acknowledge all the sources that they use."

Although the filmmakers credit Team of Rivals, a book by the much better known historian Doris Kearns Goodwin, as the basis for the film, in January New Republic writer Timothy Noah argued that the film is closer to Vorenberg’s book than Goodwin’s.

Writing about both books on the magazine’s blog, Noah concluded that “Lincoln’s principal source … is almost certainly Michael Vorenberg’s Final Freedom.” He went on to note, “I find it a bit disappointing that neither [screenwriter Tony] Kushner nor [director Steven] Spielberg has acknowledged what a valuable resource they had in Final Freedom.”

Noah then phoned Kushner, who said Final Freedom was one of twenty or thirty books that were significant to him. “I admire [Vorenberg] enormously as a historian,” he said. “His book is fantastic.” Kushner conceded that  Vorenberg’s book has the most detail about the political maneuvering behind the passage of the Thirteenth Amendment, but he said Goodwin’s portrait of Lincoln influenced him more.

Still, after reporting his conversation with Kushner, Noah said he remained “respectfully skeptical.” “Since the Thirteenth Amendment story forms the spine of Kushner’s narrative,” he wrote, “I don’t see how he can conclude that Goodwin’s book, and not Vorenberg’s, was his most important source.”

Some writers might have been calling their lawyers, but Vorenberg was unfazed, despite the money he might have made if Spielberg had optioned his book or hired him as a consultant.

“I’m not bothered at all,” he says. “While my book on the Thirteenth Amendment was a source for the film, it was not the source. I just don’t see how it’s viable for the creators of any film to acknowledge all the sources that they use.”

Vorenberg offers advice here on how to watch the movie.