ALUMS IN THE STATE DEPT: No Praying from the Podium

Iraqi President Jalal Talabani has just had a stroke, and Victoria Nuland ’83 looks over a set of talking points a press officer has handed her. “I’m not going to pray,” she says as she reads. “We don’t pray from the podium.” Under her breath she revises the wording: “Our thoughts are with…” 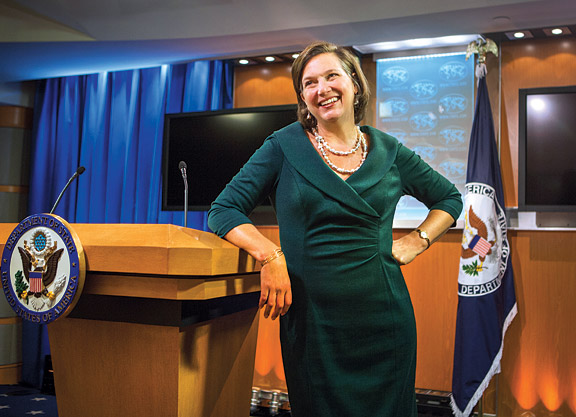 D.A. Peterson
"You wake up every morning," Nuland says, "and the job is completely different, depending on how the world has turned."

Nuland is the U.S. Department of State’s official spokeswoman, and reviewing the talking points is a routine during her daily Press Guidance Collection, when press officers covering the world gather for a give-and-take on the day’s news. Nuland pops open a highlighter and starts marking up key lines, then hands the sheets of paper one at a time to an assistant, who files them in a binder. She will bring this binder—with tabs for easy access to various regions and issues—to the podium at the daily press briefing she holds after this meeting.

“What happens, succession-wise, if he passes?” Nuland asks. “Is there anything in the constitution about incapacitated leaders?” With each answer she receives, Nuland clarifies, pushes back, asks for feedback. She settles on some final wording issues, and looks up. “Next victim?” she says.

As the group moves through the subjects of the day—Uganda’s anti-homosexuality bill, a newly released report on a factory fire in Bangladesh—Nuland is both preparing for the briefing and shaping the global U.S. public relations machine. A copy of the binder and a transcript of the briefing will go to every press officer in every foreign service post throughout the world, ensuring that everyone stays “on message.”

Victoria Nuland—friends call her Toria—has spent her entire career as a foreign service officer. She has served in embassies in Moscow, Mongolia, and China, and has been the U.S. ambassador to NATO. But this job is “a totally different stretch,” she says. “You have to learn the whole world, stay literate on all of the policies we’re running. You wake up every morning and the job is completely different, depending on how the world has turned. Last week it was Cuba and Venezuela. This week it’s Mali and Syria.”

It all began at Brown, when Nuland developed an interest in Russia. She had read and loved Tolstoy and Dostoevsky, and wondered how a culture could both have produced writers like those and also developed the brutal Communist system under which Russians were living.

“I had both an anti-mentor and a mentor at Brown,” Nuland says. “The anti-mentor, who shall remain nameless, was a guy who taught poli sci, who basically said, ‘All the evils of the world were the result of Communism and the Soviets.’ And it just wasn’t conceivable to me that a whole nation of humans woke up evil one morning. It had to be the system.” Her mentor, Professor of History Abbott “Tom” Gleason, she said, helped guide her study of literature, economics, and arms control.

During her senior year at Brown, Nuland took the foreign service exam on a whim. “When I got the call, I was twenty three,” she recalls. “I thought, ‘This is a great way to have an adventure. I’ll do this for five years, and then I’ll decide what I want to be when I grow up.’ That was twenty-eight years ago.”

The Foreign Service is much like the military, Nuland points out, adding with her characteristic humor: “[Except] we don’t carry guns. We talk the other country to death.” Each post lasts two to three years, and then it’s on to the next challenge.

When Nuland finished her first tour, which consisted mostly of conducting visa interviews in China, she was told she could pick her next post. Her higher-ups offered her a cushy post in Seoul or Australia. “And I said, ‘No. You’re opening in Mongolia, right? I want to go where it’s crazy and brand-new.’”

The embassy had two employees: the ambassador, and the twenty-eight-year-old Nuland, who was, she says, “the political officer, the economic officer, the cultural attaché, and the defense attaché.” The year was 1988, just as Eastern Europe was starting to crack. The ambassador, who met with all the country’s leaders, was hearing over and over again that “It’s never going to change, it’s never going to change.” At the same time, Nuland recalls, “I was talking to all of the young aides to these leaders, who were saying, ‘It’s going, it’s going, it’s going. It wants to be free.’”

These days, Nuland finds herself among the department’s leadership. “I love the fact that, particularly at this stage, my whole cohort is running the building,” she says. When she speaks about the Western Hemisphere, for instance, she says she must “channel her inner Roberta...I can call my friends and I can say, ‘Look, I really want to help put the best face on what we’re trying to do, so help explain it to me, and I can help them to articulate it in a way that their mother will understand, that the kitchen table will understand.’”

The role of state department mouthpiece is “very personal to the secretary,” Nuland says, and she was Hillary Clinton’s choice. She realizes that with John Kerry now the U.S. Secretary of State, she’ll be looking for a new job soon enough. Which is fine with her.

“Like all good foreign service officers,” she says, “I go back in the pool, and see what they might want me to do.” She has promised her teenage kids that the family can stay in Washington until they’ve graduated from high school. But after that, she says, “There are three or four places on the planet that I think would be really fun.” She won’t say what those places are—just that she likes “difficult, complicated relationships. Relationships that require a lot of talking, a lot of tea, a lot of vodka, to get to the right places.”

Reader Responses to ALUMS IN THE STATE DEPT: No Praying from the Podium