Jon Land ’79 is on a mission to upgrade the reputation of thrillers, those page-turners that literary purists disdain but the rest of us scarf down like beer nuts. Land wrote his first thriller for his honors thesis at Brown and has since churned out more than thirty books, at the rate of nearly one a year. 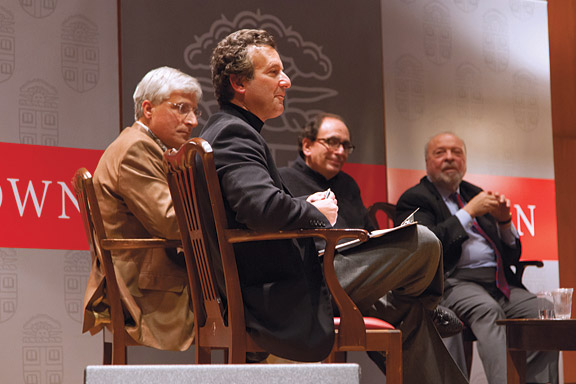 Ben Tyler
Jon Land (foreground) hosts fellow thriller writers (l-r) Steve Berry, R.I. Stine, and Nelson DeMille.
Land credits Brown’s curriculum with making it possible for an English concentrator who loved to read but had never taken a creative writing class to attempt a novel for his thesis. Running to 600 typed pages, the manuscript, he admits, “was terrible. Totally unpublishable.” His adviser, the late English professor Elmer Blistein, “told me it had all the qualities Brown writing classes couldn’t teach me—episodic plot, pacing, suspense—but none of the ones Brown should have taught me—grammar, spelling, punctuation.”

Last fall, Land donated his manuscripts and letters to the John Hay Library to create a Thriller Writers Archive, which he hopes will become a resource for scholars of the genre. Thomas Horrocks, director of the Hay, says the thrillers will be in good company: the library already houses the H.P. Lovecraft collection and has several pop collections, including noir, pulp fiction, and comic books.

Land, who is a board member of Brown’s Friends of the Library, is vice president of marketing for the International Thriller Writers (ITW), which plans to house its minutes in the archive. He says ITW and Brown librarians are approaching a select group of authors with the goal of acquiring their draft manuscripts and papers.

To kick off the archive, last November Land brought to campus some of the biggest names on the racks in airport newsstands: David Baldacci, Steve Berry, Nelson DeMille, Lisa Gardner, and R.L. Stine, whose Goosebumps series, which has sold 350 million copies of 300 books, makes him one of the best-selling children’s authors of all time.

In August, Land will publish Strong Rain Falling, which is set at Brown and will bring his career full circle. A huge Brown football fan, Land says he got the idea for the novel last summer when Head Coach Phil Estes said he should write about a coach. “I said, ‘Yup, Coach! I’ve just had an idea.’ I’d been wanting to write a scene at WaterFire,” Land says, “and it occurred to me that Dylan [Torres, a recurring character] could come to Brown to play football.”

In the first chapter, Dylan meets with Estes. That night, Dylan and his surrogate mom, Texas Ranger Caitlin Strong, are at WaterFire when a gunfight erupts. Boats crash into the bonfires set in the river, and sparks fly—literally. By the end, Caitlin is explaining to the Providence cops why she killed four men.

Estes is a Land fan. “I’ve read most of the Caitlin Strong books,” he says. “I like to read them on the bus when we’re traveling. They’re quick and action-packed—just what I like.” His only disappointment, he says, is that he didn’t get a bigger role in the new book. “Coach Estes could have been a code name for a drug cartel,” he suggests, imagining a whole new subplot.

Reader Responses to Do Thrillers Matter?