What you wear is who you are—or at least the version of yourself you want the world to see—and in a world of seemingly infinite fashion choices, branding yourself has never been easier. That Brown student dressed all in black and carrying a big fat copy of David Foster Wallace’s Infinite Jest? A hip artist who cares. The guy wearing tattered Carhartt jeans? He’s either on the wrong campus or has been hammering nails for Habitat for Humanity. 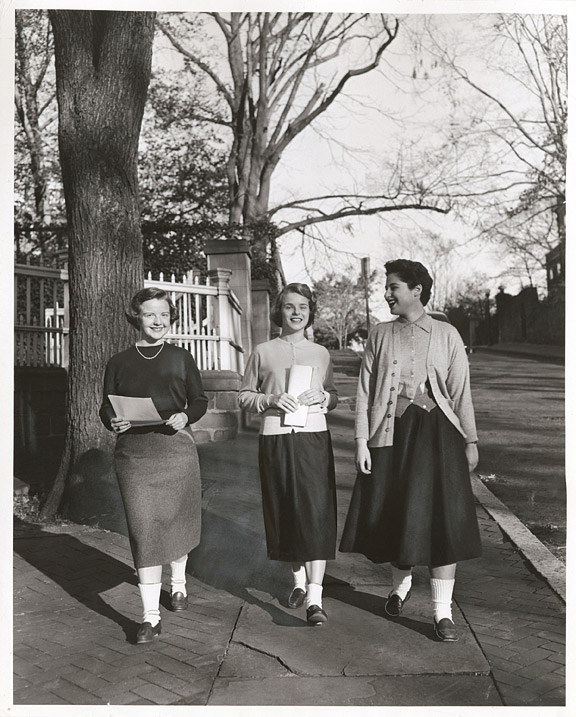 Brown Archives
During World War ll the military commandeered the U.S. fabric supply, by 1954 skirt lengths had plummeted, and these Pembrokers could wear full-fashioned skirts accessorized by penny loafers and bobby socks.  Click here to see more student fashion chic photos.
Just a few decades ago, rules dictated what students wore. Brown men wore jackets and ties, and Pembrokers dressed up for dinner. Then in the late 1960s the world let loose: girls burned their bras and boys grew their hair. Those tidy linen sheaths gave way to striped knit minis, and starched chinos faded away to fading jeans. By the late 1970s, artsy Brown women paired army boots with vintage dresses, while their more mainstream classmates sought a kind of anonymity in unisex denim, flannel shirts, and insanely puffy down jackets.

These days, Brown students seem a particularly stylish bunch. Last winter, women sported a startling array of sleek leather riding boots, which they wore over leggings or skintight jeans topped by bulky knit sweaters. This spring, sundresses sprouted with the daffodils—floating as often over gladiator sandals as cowboy boots. Brown fashionistas seem as savvy, and often as creative, when dressing as when studying.
Curious to see how students dressed themselves in the past, former BAM intern Marlee Bruning ’12 went digging with her fine eye for fashion through old photographs in the University Archives. There she discovered an armload of pictures of Pembrokers wearing period pieces: Edwardian leg-of-mutton sleeves, tweed traveling suits, crisp gym suits, and saddle shoes.

Among the dozen of those photos assembled in these pages, you can see hemlines rise and fall, and sneakers break out of the gym to become everyday wear. You can also witness students shrugging off the reins of the dictatorial old fashion industry and—in the spirit of the Open Curriculum—riffle through its creations to invent their own independent styles.