In the weeks following last December’s Newtown school shooting, President Christina Paxson looked for a way to engage the Brown campus in the national discussion about guns. With the help of the Political Theory Project’s student-led Janus Forum, which sponsors debates on many policy issues, she was on hand one afternoon in mid-March to hear a panel of three academics tackle the relationship between handguns and violent crime. By the end of the afternoon it was clear that even statistically well-equipped academics can hold the same polarized positions on regulating handguns as the rest of the non-PhD-holding public. 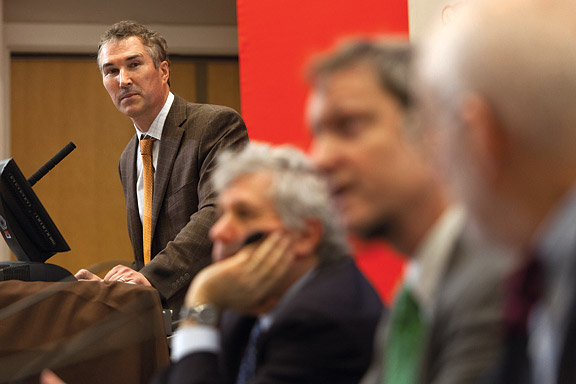 Scott Kingsley
Political Theory Project director and political science professor John Tomasi introduces panel members Carl Bogus, John Lott, and Steven Lippman.
Writers going at least as far back as D.H. Lawrence have underscored the unusually violent nature of the American spirit, but it was Carl Bogus, a law professor at Roger Williams University School of Law, who gave that perception the certainty of numbers. When it comes to violent crimes, Bogus said, the United States is “a gigantic outlier among industrialized nations.” Robberies and aggravated assaults, for example, turn into murder much more frequently in this country, and rates of lethal crime are significantly higher.

Why? According to Bogus, the author of The Second Amendment in Law and History: Historians and Constitutional Scholars on the Right to Bear Arms, the answer is obvious: the prevalence of handguns. “States with high rates of gun ownership,” he said, “have much higher rates of murder and suicides.”

He cited a study from the New England Journal of Medicine that examined crime rates in the twin cities of Seattle and Vancouver from 1980 to 1986. It found that, while burglary and aggravated assault rates in the two cities were nearly identical during that period, the murder rate from handguns was almost five times higher in Seattle than in Vancouver. The explanation, Bogus argued, was that stricter gun laws in Vancouver meant fewer handguns in that city.

All of this has an enormous cost to society, argued Steven Lippmann, a psychiatrist and  professor of psychiatry and behavioral science at the University of Louisville, who presented charts estimating the annual cost—which runs into billions of dollars—of caring for the 100,000 people who are injured in U.S. gun shootings every year. The sense of safety that a handgun provides is illusory, Lippmann insisted. “Americans,” he said, “while seeking security, are shooting themselves and their families in their own homes.”

John Lott, a research scholar at the University of Maryland and author of More Guns, Less Crime, was having none of it. Although Lott agreed with the emphasis on handguns—all three panelists acknowledged that banning assault weapons makes no difference in violent crime statistics, as so few of them are used to shoot people—his statistics supported his argument that the problem is not too many handguns, but too few, or at least too few in the hands of the most vulnerable victims of crime.

“Can you name,” Lott asked the audience, “one place where guns are banned and the murder rate fell?” There is no such place, he said. He showed graph after graph that illustrated how murder rates increase after laws are put in place restricting access to guns. “When you ban guns,” he said, “murder rates go up.”

Why? Gun bans, Lott said, restrict access to weapons only for the good guys. The bad guys will always be able to get guns. “Who obeys these laws?” Lott asked. “Law-abiding, good citizens. So you get this perverse effect where these laws make it easier for these bad guys to carry out their attacks.… My research convinces me that it’s the most vulnerable people in our society who benefit the most from gun ownership: poor minorities, women, and the elderly, for example.”

The discussion left many in the audience uncertain about what to conclude. When the speakers asked for questions, even Paxson, an economist, lined up at one of the microphones to ask for clarification of the speakers’ use of statistics.

Perhaps the most interesting question, though, came from a student who asked each of the speakers to offer one policy recommendation based on his research. Bogus replied by suggesting laws to restrict the capacity of ammunition clips, while Lippmann said the country needed to “address issues of poverty, jobs, education, and policing.” As for Lott, he said lawmakers should “make it easier for poor minority people to carry a concealed handgun.”

None of the panelists seemed entirely satisfied with his answer. The feeling of frustration in the room was palpable. By the end of the discussion it was clear that, when it comes to reducing gun violence in America, finding much agreement on the most effective public policy remains a long way off.