Everybody loves science. What parent doesn’t breathe a sigh of relief when a college-bound son or  daughter announces a decision to study in that field, whether it’s engineering, particle physics, or computer science? 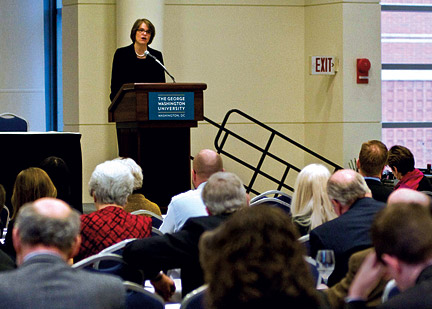 Credit
Paxson, in Washington, D.C., promoted the continuing value of the humanities to society.
After all, the kid could have concentrated in English.

Which raises the question: what are the humanities worth? President Christina Paxson bravely offered an answer when she delivered the keynote address in Washington, D.C., on March 19 at the annual meeting of the nonprofit advocacy group the National Humanities Alliance.

As Paxson pointed out, the humanities certainly have their enemies. She named the usual suspects—radio talk show hosts, Republicans—and observed that good politics can sometimes mean taking potshots at liberal arts:

“If you happen to be the governor of a larger Southern state,” she said, “then questioning the humanities, or college in general, can make for an easy and effective form of populist politics.”

As a result, while federal science funding has remained level, funding for the National Endowment for the Humanities has been decreasing since the Reagan years, most recently down $21 million between 2010 and 2012.

“Humanities funding,” Paxson said, “often strikes critics as an especially muddle-headed form of government spending, which is not made more palatable by the fact that an education in the humanities so often turns out to be an education into liberalism.”

But this politicization misrepresents the value of studying the humanities, she countered. They not only have obvious benefits to such fields as history, literature, art, drama, music, and area studies, she said; they are key to understanding and applying our culture’s deepest values.

Although the humanities’ benefits can’t be easily measured in terms of GDP or stock market rates, Paxson argued that the humanities often motivate, and even inspire, innovators whose successes have improved those measures.

“When I ask any of our business leaders what they valued most during their years at Brown,” she said, “I am just as likely to hear about an inspirational professor of classics or religion as a course in economics, science, or mathematics.”

Paxson offered three strategies for promoting the humanities. First, she said, it’s up to scholars and higher education administrators to point out that “in the complex, globalized world we are moving toward, it will obviously benefit American undergraduates to know something of other civilizations, past and present. [And] any form of immersion in literary expression is obviously helpful when we are learning to communicate and defend our thoughts.”

In addition, she said, those in higher education have a responsibility to remind society that measuring the immediate benefits of knowledge is a myopic view.

“We certainly want to know what benefits will accrue from all of the research and conversations taking place on a lively college campus,” she said. “But we should be prepared to accept that this value may be difficult to measure and may not be clear for decades or even centuries.… Random discoveries can be more important than the ones we think we are looking for.”

Finally, Paxson argued that, given the rapid pace of change today, the humanities can help us better understand the innovations arising with such blinding speed. “We need humanists,” she said, “to help us understand and respond to the social and ethical dimensions of technological change.”

That’s where universities like Brown come in. “Universities,” Paxson argued, “should not merely train students who can survive and prosper in the world as it is. Instead, we should educate students who change the world for the better. Our focus should not be only on training students about the skills needed immediately upon graduation. The value of those skills will depreciate quickly. Instead, our aim is to invest in the long-term intellectual, creative,  and social capacity of human beings."