“We are gathered here against our will,” University Chaplain Janet Cooper Nelson observed as a small crowd gathered in front of Faunce House on April 17, two days after the Boston Marathon bombings. The horror of those events seemed at odds with the bird song and budding elms on the Green. 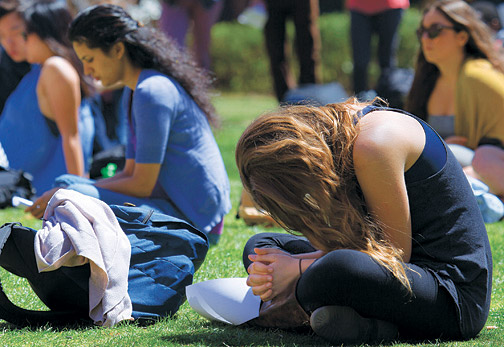 Mike Cohea
Students mourned the carnage in the days after the Boston Marathon bombings.

“The hardest thing about being the survivor of terror or near misses—and I’m speaking from my own unfortunate experience—is reclaiming sound,” said Hillel’s Rabbi Mordechai Rackover, who had attended yeshiva outside Jerusalem and lost friends and witnessed bombings there. Shared horror brings us together, he said, but the real challenge is to reclaim a sense of community based on positive choices, not mourning.

In turn, each of Brown’s chaplains offered words of comfort and hope: from the Koran, the New Testament, and the writings of Rabbi Harold Kushner. Slips of paper were distributed throughout the crowd, and University Chaplain Janet Cooper Nelson asked people to read aloud “The Nature of This Flower Is to Bloom,” by June Jordan:

… We do what we can. And by doing it, we keep
ourselves trusting, which is to say,
vulnerable and more than that,
what can anyone ask

After the poem, she had called for silence, which was broken by the University bells, which rang forty-eight times. “The bells call us back to our happy and joyous chaos of the sounds of this Green and the love we share here,” Cooper Nelson announced. “May joy return.”

Reader Responses to May Joy Return