In December 2007, I got an offer I could only refuse. Odor-Eaters wanted me to be a judge at its annual National Rotten Sneaker Contest, which would involve sticking my nose into a bunch of sneakers debauched by kids from across the country and determining which smelled the worst. A specialist in the psychology of smell, I had been selected because of The Scent of Desire, the book I’d just written about the under appreciated importance of aroma in our lives. The publicist who contacted me was very engaging and persistent, and she seduced me with the promise of a stipend and holiday at a deluxe resort in Stowe, Vermont. 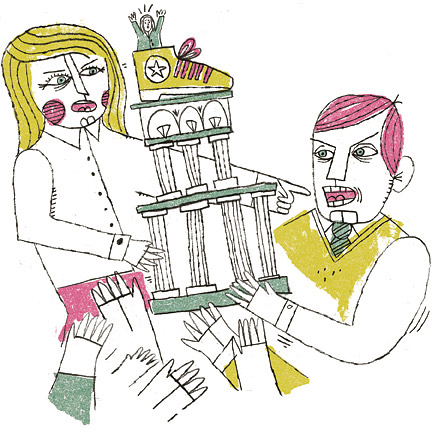 The contest, which began in 1975, takes place inside the city hall of Montpelier, the state capital. Other judges included the chief of police, the city commissioner, and the school superintendent, but they only had to visually inspect the revolting footwear. The job of odorologist—their term for the sniffer judges—fell to me and a NASA employee who sniffs human and mechanical waste to determine how they’ll smell in space.

Almost as soon as I arrived at the resort, the moms and dads rushed to sit beside me during meals, pulled up lounge chairs beside me at the pool, and, best of all, bought me drinks at the bar, all the while regaling me with supposedly hilarious stories of what their children had done to pollute their footwear. At first I thought the parents were just unusually friendly, but my naiveté was dispelled when I saw how they behaved at the end of the contest, when the winner was announced. The loser parents sulked and stalked out, some shouting “Unfair!” while others appeased their child (and themselves) by blaming affirmative action.

“It’s because she’s a girl that she won, honey,” I heard one mom tell her dejected son. “Your sneakers are by far the worst.” I had no idea that having your child’s sneakers forever enshrined in a cabinet called the Hall of Fumes was an honor worth behaving so badly for.

As it turned out, I wasn’t nearly as grossed out by the sneakers as I’d feared. They hardly smelled like roses, but most were no worse than the stench of a stagnant pond, which was indeed the source of many of the sneakers’ misadventures. Thinking so much about the mephitic footwear beforehand and preparing myself for horror actually changed the way I perceived them. Then it hit me: our thoughts can profoundly shape our experience of disgust.

At the time, my agent was prodding me for my next book topic, but nothing felt right. My experience at the contest changed everything. I knew I had to write about disgust. In the process of researching and writing That’s Disgusting, I discovered that disgust mirrors human nature. The way we respond to this emotion reflects who we are and our innermost beliefs.

Why did I feel more revulsion toward the parents’ behavior than toward their children’s shoes? Because disgust affects our moral judgments as well as our perception of what is stinky or bearable. Why did the parents so desperately want their kid’s shoes to be declared the most disgusting? Because their competitiveness made losing the tournament more distasteful to them than seeing their child anointed the stinkiest sneaker wearer. Disgust originated to prevent us from eating poisonous food, but this simple safety mechanism has since evolved into a uniquely human emotion that explains the lure of horror movies, underlies our fear of death, instigates prejudice, and even influences whether you’re a Democrat or Republican.

I will be going to my sixth Odor-Eaters contest this year. My next book is about food, and I’m hoping the scents I take in will inspire me.