Roland Laird ’82 was an optimist and a visionary, and at the time of his death from a heart attack on February 7, he had just realized his biggest dream to date: MIST Harlem, a $21 million cultural and community center that houses a restaurant, three state-of-the-art movie theaters, and a film production studio. Located in the Kalahari Condominiums, a mixed-income development on 116th Street in Harlem, MIST was designed to provide jobs and a nexus for the Latino and African American neighborhoods surrounding it. 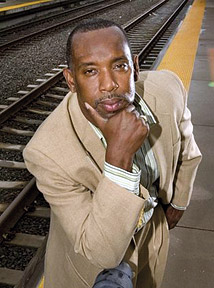 Laird was CEO of My Image Studios, from which MIST took its name. In an interview with the BAM shortly before his death, he characterized it as a place where you could see “Japanese hip-hop artists as well as black opera singers.” In September it hosted a book signing for Miami Heat star Dwyane Wade; in January jazz singer Cassandra Wilson performed there.

Born in Brooklyn, Laird grew up in Queens and described himself as a “gear-head.” At Brown he concentrated in math and studied computer science, while also playing freshman football and sprinting for the men’s track team, of which he was tricaptain. After college he worked as a software engineer, but told the BAM, “I’ve always been interested in culture. Brown showed me how I could fuse culture and entertainment with a passion for science and technology.”

A serious collector of comic books, Laird was frustrated by the genre’s lack of black heroes, so in his spare time he created the publishing company Posro Media in 1988. The name was a positive spin (pos) on the negative stereotypes (neg) attached to the word Negro. Posro Komics published the hip-hop series MC Squared: A Man With a Serious Game Plan, aiming it at inner-city blacks and focusing not on superheroes but on real people in real trouble—in the first issue, an innocent man is killed at a rap concert.

Laird was thrilled when the Baseball Hall of Fame archived MC Squared for its attention to the Negro Baseball League. “First contemporary comic book to score that honor,” he joked in a letter to the BAM. Posro followed that success with The Griots, a witty comic strip about a black family that owns a newspaper. It was picked up by black-owned papers across the country.

In 1997, book publisher W.W. Norton asked Laird and his wife, Taneshia Nash Laird, to write a graphic history of African Americans. The book, Still I Rise, ended with the Million-Man March on Washington, D.C., and a new edition came out in 2008, updated to include Barack Obama’s election as president.

Throughout his life, Laird was committed to helping young blacks. “He was looking to be an African American role model and helping advance positive images of blacks,” says Leon Johnson ’82, Laird’s high school classmate, Brown roommate, and close friend. “He was a uniter.”

Laird cofounded the New York chapter of Brown’s Inman Page Black Alumni Council and the Ethel Tremaine Robinson Foundation, a nonprofit charity that promotes African American philanthropy among alums. Since 2006, he enabled twenty-two middle- and high school students from the New York and Atlanta areas to spend a summer taking courses at Brown. He raised funds, gave these teenagers advice, made sure they had enough clothes, and drove many of them to campus, sometimes along with their parents, says Robin Rose, senior associate dean for continuing studies. Laird is survived by his wife, his parents, a sister, and two daughters, Imani, 6, and Naima, 2. His friends have organized an online campaign to support the girls’ education at www.giveforward.com/inmemoryofrolandlaird.

Reader Responses to The Uniter