Last summer Andrew Kim traveled to Kisumu in western Kenya to study the city's health care needs for an international nonprofit group. One of his roommates there, Choi Makur, was a tall, aways smiling twenty-one-year-old from the newly formed Republic of South Sudan. Kim—who is from Seoul, South Korea—was blown away by Makur's story. He was forced to become a child soldier when he was five. Makur had endured long periods of homelessness and near starvation. To enroll in school, he sometimes had to walk for more than seven days. 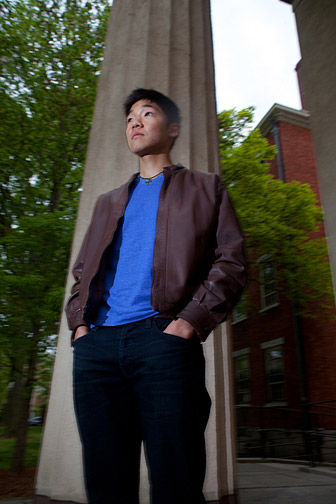 Kim visited Makur in Juba that summer, and when Kim returned to Brown he founded the group Students for Students: South Sudan, which includes members in both the United States and South Sudan. So far, it has raised money for a new library and begun a book drive in conjunction with medical schools and hospitals in the Providence and Boston area.

Kim says his involvement with South Sudan has “been my most emotionally fulfilling experience at Brown.” Because of his work there, Kim was one of thirteen Brown students invited to attend the Clinton Global Initiative University this April. Brown honored him this spring with both a Joslin Award for leadership and service and the chaplains’ Kapstein Award for interfaith leadership.

Next year, with a Harvey A. Baker Fellowship from Brown and a scholarship from the Cambridge Commonwealth Trust in England, Kim will attend Cambridge University to study development in low-income nations. After that, he says, he plans to study medicine.