Although Urmila Chadayammuri’s parents were born in India, she grew up in Moscow. Her grandfather was a Communist leader, and in the 1970s her father won a scholarship to study in the Soviet Union. He went back to India for a few years, where a marriage was arranged for him, then returned to Moscow. “He missed the bubbly, cosmopolitan culture he associated with Moscow,” she says. “That sounds funny for people in the United States to hear about Russia, but it makes total sense if you were born in rural southern India.” 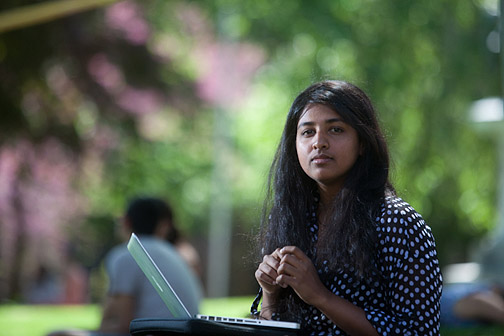 In the summer after her sophomore year, Chadayammuri returned to Russia as a Brown International Scholar. She worked at the Sternberg Astronomical Institute, part of Lomonosov Moscow State University, researching dark energy, the mysterious matter that makes up more than two thirds of the universe.

She also studied the state of physics in post-Soviet Russia. Lack of access to equipment and high-powered telescopes, she found, has led to one inevitable result: most of the astrophysics being done in Russia is theoretical. The breakup of the Soviet Union meant several newly formed countries were now home to telescopes and other equipment Russian scientists depended on. A lack of cooperation between the nations made it difficult for scientists to share the facilities. Chadayammuri says this situation began slowly changing only about a decade ago.

This summer, Chadayammuri begins a job at McKinsey & Company in New York City. It’s a drastic change in plans, she admits, but she believes the job will enable her to have a greater impact on society than a career in physics would.

Reader Responses to Theory and Practice