Television writer Austin Winsberg ’98 (Gossip Girl, Jake in Progress) returns to his theatrical roots with the musical First Date, which he wrote with songwriters Alan Zachary and Michael Weiner. After a successful run in Seattle, the quirky romantic comedy (think Annie Hall with song and dance numbers) makes its Broadway debut at the Longacre Theatre, with previews starting July 9. The opening is August 4. 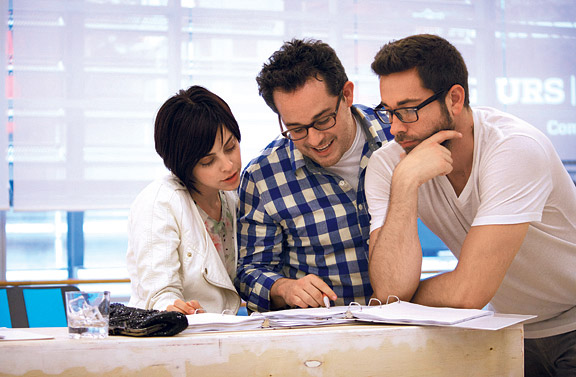 Courtesy Austin Winsberg
Playright Austin Winsberg, center, goes over his script with actors Krysta Rodrigues and Zachary Levi.
BAM You’re an experienced TV writer. What inspired you to write a musical for the stage?
AW  I’ve always liked musicals. I once wrote a musical TV pilot, so I had dipped my toes in this water before. I’m close friends with Alan Zachary and Michael Weiner, and we were looking to write something together. We found that we all had a lot of funny dating stories, so we thought, “What if we did an entire show that takes place in real-time on a blind date?”


BAM What’s your worst first-date experience?
AW  How much time you got?

BAM The awkward blind date is well-worn territory. What’s new about your take?
AW  We wanted the show to feel very current, so there’s a big Internet component, like the consequences of Googling your date before you meet. Google is actually a character in the show. We imagined Google as a very gossipy, bratty fourteen-year-old girl who’s busy texting all day.


BAM What’s the overall musical style of the show?
AW  There’s a mix of styles. Some songs feel more Broadway-ish. Others are more rock. The girl’s gay bestie sings technopop. The guy’s Jewish ancestors sound like Fiddler on the Roof. We tried to make the songs representative of the characters.


BAM Who’s your audience?
AW  We thought the show would appeal more to a younger crowd, but the big surprise that came out of the Seattle run was that people in their seventies liked the show just as much as people in their twenties. Everybody can relate to an awkward first date.


BAM The average incubation period for a Broadway musical is eight years. You’ve managed to get there in less than half that time. What’s your secret?
AW  We’ve been incredibly blessed. We got Broadway producers [Junkyard Dog, which produced the Tony-award-winning Memphis] signed on at our first reading in October of 2010. With this project, we wrote what we wanted to write in a way that felt true to us. It has risen to the top, while pilots I’ve written to fit network appetites have come and gone. I think there’s a lesson in that.

Hungering for contact, celebration, and a feeling of lightness.
Science & Tech

Reader Responses to Googling Your Date