Describing herself as a “daughter of the South—the Deep South, Mississippi,” Baccalaureate speaker and honorary degree candidate Beverly Wade Hogan imparted to the class of 2013 her own mother’s time-honored counsel: with privilege comes responsibility. “Your power is beyond measure,” she told the seniors sitting before her in the First Baptist Meeting House, Saturday May 25. “If you—who have the advantages of education, perspective, and discipline—don’t participate to the fullest extent of your abilities, America’s democracy will crumble. And if America crumbles, the world will fall.” 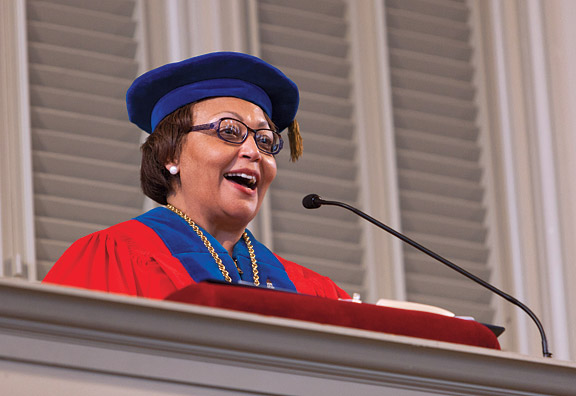 Since 2002 Hogan has been president of Tougaloo College, in Jackson, Mississippi, with which Brown formed a partnership on May 18, 1964—the tenth anniversary of the Supreme Court’s decision in Brown v. Board of Education. When Mississippi cut funding to the historically black college and threatened to revoke its charter, two Tougaloo trustees who were Providence residents prevailed on Brown President Barnaby Keeney to help. At the height of the Civil Rights movement the two schools formed a “cooperative exchange.” 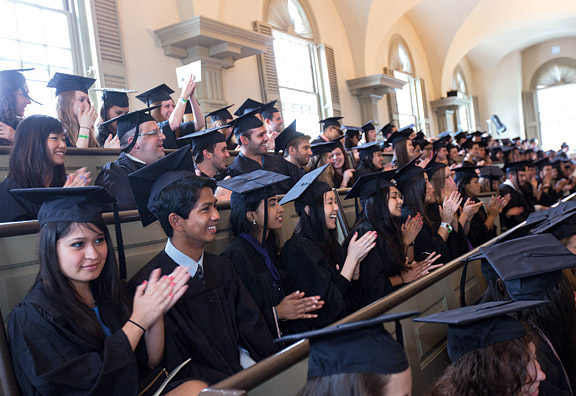 Scott Kingsley
The seniors managed to fit in the First Baptist Church in America- but just barely.
Uneasy at first, the relationship was cemented over the past half-century. Hundreds of Brown and Tougaloo students and faculty have spent semesters at each others’ campus, and programs have evolved to enroll Tougaloo graduates in public health and medical school at Brown.

At Baccalaureate, Hogan and President Christina Paxson signed what they called “a new covenant of our relationship.” The two presidents will symbolically repeat the signing at Tougaloo’s graduation exercises next spring, marking the partnership’s bicentennial and Brown’s 250th anniversary.