In May 1978, thirty-three Brown students, faculty, and staff flew to India to climb the country’s second highest mountain, Devistan. Over reunion weekend this May, twenty-five of those climbers returned to Providence, giving a public forum on the journey that they described as the essence of their education. 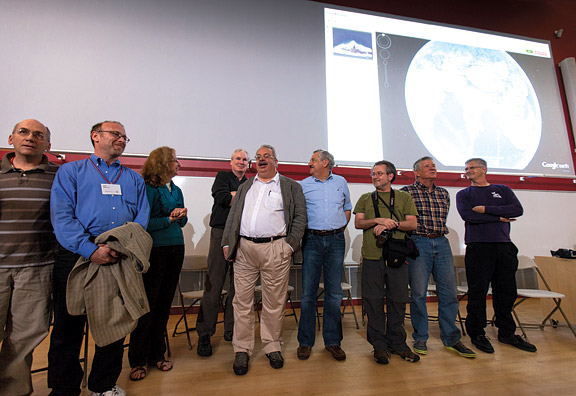 Scott Kingsley
Nearly all of the original thirty-three climbers were on hand for a reunion and forum.
The 1978 trip was led by longtime Brown geological sciences professor, department chairman, and NASA administrator Tim Mutch, who died two years later on another Himalayan expedition. In the early 1970s, Mutch taught a Modes of Thought course called “Exploration.”

Frustrated that students weren’t grasping the true nature of the subject in the class readings, Mutch persuaded his academic bosses to let him teach a group experientially. Then he set the students loose to plan the trip to Devistan.

At the forum, Rebecca Moore ’77, who runs Google Earth Outreach (the company’s nonprofit arm), created a picture of the narrative using new software that allowed her to circle the globe and then zoom in on Providence, where Mutch and his students spent two years planning the trip; New Hampshire, where they practiced ice climbing; New Delhi, where their luggage was waylaid by customs; and finally the gorge through which they approached Devistan. Along the way she interspersed old snapshots of the landscape and of shaggy-looking students wearing heavy jeans and hand-knit sweaters in those days before high-tech climbing clothes. 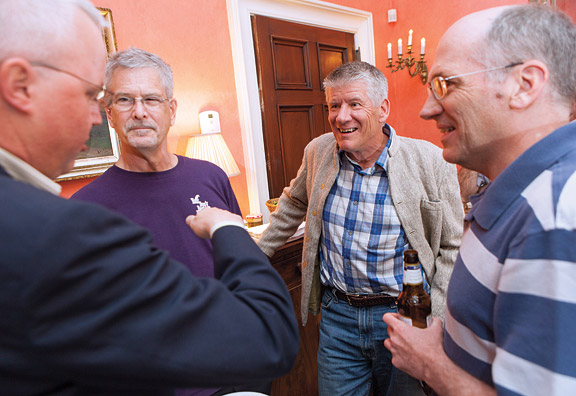 Scott Kingsley
Dave Stehle '81, Paul Haire '76, Rob Daigle '75, and Mike McDonald '78 reminisce about the climb.
The only way to reach Devistan was up a gorge cut by the headwaters of the Ganges. Each morning, the sun would melt the ice cap, sending freezing water into the gorge, which the climbers crisscrossed on makeshift bridges. They rose early to climb before the water level became too high as the sun got hotter. One fateful day, two members of the group were swept into the river. John Braman ’77 managed to save a porter’s life by following him out onto the bridge and cutting loose the man’s pack with a knife. But biology researcher Paul Palatt wasn’t so fortunate. Suffering and disoriented from dysentery, he’d neglected to clip himself to the traverse line, and, when the river swelled over the bridge, he was lost in the churning water. His body was never recovered.

Shattered, the group spent several days in a meadow they described as paradise. They decided to regroup and continue. Twenty-five of them made it to Nanda Devi, the peak. Braman read from a letter he had written to his then-fiancée, describing the summit as a “divide between reality and mirage.” He continued, “It seems like a miracle if you get this letter.” She did.

The alumni described Mutch as “the embodiment of the New Curriculum,” and a mentor who gave them the freedom to make the trip their own. His daughter and grandson were in the audience at the forum.

Reader Responses to Into the Himalayas