To some, Manhattan’s skyscrapers may be monuments to human creativity and achievement, but to Marcia Fowle ’57 they’re death traps. For birds. 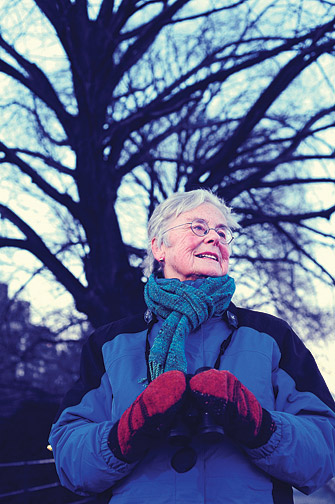 Soon after becoming executive director of the New York City Audubon Society in 1993, Fowle began hearing from members about birds crashing into the glass-plated World Trade Center with alarming regularity. Troubled, Fowle and her fellow birders began checking other buildings wrapped in big reflective windows, and, sure enough, they found dead birds outside such places as the Metropolitan Museum of Art and Jacob Javits Convention Center.

Birds, it seems, have trouble distinguishing between open air and the outdoor reflection in mirror-like windows. And unlike most natural threats, which tend to filter weaker birds out of the gene pool, this type of bird mortality is more or less random.

“This is not survival of the fittest,” says Fowle, who is also coauthor of The New York City Audubon Society Guide to Finding Birds in the Metropolitan Area. “It’s completely indiscriminate as to what bird gets killed. It doesn’t matter if it’s a weak bird or a strong one.”

In response, Fowle and other Audubon members created Project Safe Flight, organizing a database record of when and where dead birds are found outside glassy buildings. A freezer in the New York City Audubon office became a morgue for birds destined for a Maryland research lab. “We would have a freezer full of these birds,” Fowle says. “But you realize this is just the teeniest part of the problem.”

The numbers collected over the last twenty years are staggering. Each year, anywhere from 100 million to 1 billion birds die from collisions with buildings in the United States, according to the American Bird Conservancy. Some species, especially songbirds that migrate at night when city lights can compound the problem, are particularly vulnerable. Since 1997, for example, volunteers have found 818 dead white-throated sparrows at the bases of New York City buildings, the highest number for any species. Along with the loss of natural habitat and predation from pet cats, hazardous buildings are among the biggest threats to the songbird populations in the United States, Fowle says.

After graduating from Brown with a degree in English and American literature, Fowle worked as an assistant to Henry Kissinger while he was teaching at Harvard, helping him coordinate a program that brought to Cambridge young international stars in politics and academics. “He’s a brilliant man, and something that people don’t make much of was that he had a wonderful sense of humor,” Fowle recalls. “He [Kissinger] was overextended and worked us to death.”

Fowle put her career on hold to raise three daughters, including Margaret Fowle ’88 and Susie Fowle ’90. Marcia resumed her education at Manhattan’s Hunter College to earn a master’s degree in urban affairs in 1992, which helped her get the job with the Audubon Society.

Fowle stepped down as executive director in 1998 to become a member of New York City Audubon’s board. She is also on the board of the Bird-Safe Glass Foundation, a New Jersey nonprofit corporation founded in 2006, for which she writes letters and lobbies developers and property owners.

Preventing bird collisions into windowed skyscrapers isn’t easy, but Fowle and her allies have had a few successes. Netting pulled taut around the lower levels of one of the World Trade Center towers in 2000 helped birds bounce off unhurt before hitting the building. The Durst Organization, a major real estate developer, now dims the lights in its buildings during spring and fall migration. A postal building near the Hudson River recently retrofitted its windows with opaque covers.

And yes, Fowle is her real name, though people are generally reluctant to point out how oddly appropriate it is for one so devoted to birds. When she started working at the Audubon, she was surprised that not a single person brought it up.

“Finally, I said ‘Is anyone going to make a comment about my last name?’” Fowle recalls. “They all started chuckling because they had been talking about it among themselves anyway.”

Reader Responses to In Glass Houses