I knock on the door of Alma’s apartment, but there’s no answer. I can discern no yellow glow of light coming from inside her garden-level apartment on Bowen Street, near the Pembroke Campus. The blinds are drawn. I make my way around back, where I peer into the slot between the windowsill and the shade. The kitchen counter is bare. No teacups, porcelain figurines, and stacks of papers. No furniture, no radio, no sign of the ninety-seven-year-old Alma. 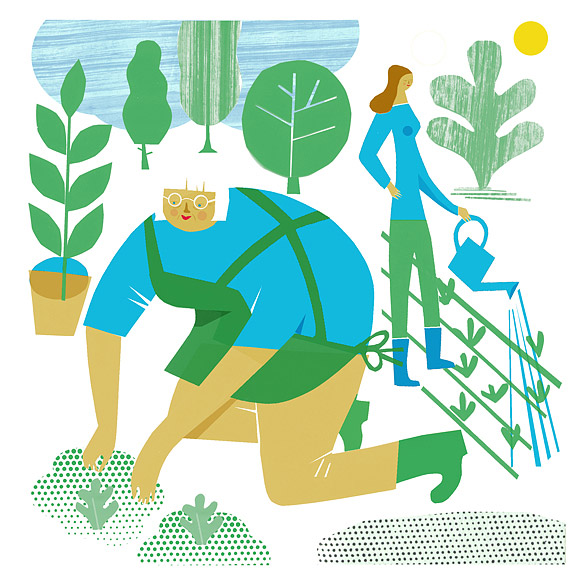 She is a friend from my college years with whom I don’t keep up on Facebook. I don’t have her saved in my phone contacts. I know her number because I’ve dialed it often, but for some reason I don’t call. Instead I walk to a bar on Wickenden Street. One of the regulars there tells me Alma had taken ill suddenly and passed away several weeks earlier, on June 9, 2010.

If you were at Brown during the last few decades, chances are you passed Alma Sanderson slowly walking down Thayer or Waterman street. She had cropped white hair and was partial to blue or tan sweaters. Though not a Brown alumna, she attended every commencement. In keeping with her philosophy to do at least thirty things a month, Alma took classes at Hamilton House’s Adult Learning Exchange, tended friends’ pets, and shopped on the East Side.

I met her in 1997, when I was a coordinator of the Urban Environmental Lab’s community garden. Alma worked her plot steadily over the years and was in charge of the perennial berries. She tolerated my impractical urge to add cranberries.

Our time working in the garden plots and exchanging recipes at potlucks led to our attending services together at the First Unitarian Church of Providence, where Alma was a member. I made regular visits to her apartment in the large brick building occupied mostly by Brown and RISD students. She shared family photos and told me stories of canoeing and camping in Cranston with her parents and sister. The pictures, taken around 1915, showed girls running around with dogs, while parents loitered with paddles on the rocky shores of Narragansett Bay.

Not long after this idyll, Alma’s father died and she lived for a time with her grandparents near Roger Williams Park. She completed high school while living at the YWCA in Providence and eventually attended secretarial school in New York City. She raised two children, one now living in southern Rhode Island, the other in Italy.

Alma was the first person to show me it was possible to live life on your own terms into your eighties and nineties. We laughed and talked about her dates with Brown undergrads in the early 1930s.

I sent Alma postcards as I moved further west, and she kept me up-to-date on the garden. When it was cleared for a construction project in 2008, I was outraged. She met my indignation with peaceful acceptance. Until the site was actually developed, she and the other gardeners would grow what they could, she reasoned. It was because of her and others that the plots did not decay while the University debated the garden’s future and eventually decided to save it.

And so Alma lived on her own terms until the end of her life. As her son noted, she ducked out a few years before her 100th birthday, preferring to avoid the fuss of the celebration. Catching up with Alma was a regular part of my visits to Rhode Island. Now I’ll walk by the community garden on Angell Street and think about the influence of people like Alma, who quietly enrich our lives.

Rebekah Doyle is a doctoral student in physical therapy. She lives in Flagstaff, Arizona.