Banker to the Nation

January 6, 2014—In a historic vote, Janet Yellen ’67 won Senate approval today to become the new head of the Federal Reserve. Yellen, who was nominated by the first African-American U.S. president, becomes the first woman to lead the national bank. Twelve Republicans joined Democrats for the 56 to 26 vote. (Severe weather kept many senators away and unable to vote.) Yellen is also the first Democratic nominee to lead the Fed since 1979, and joins World Bank president Jim Yong Kim ’82 as Brown alums leading two of the world’s most powerful financial institutions. 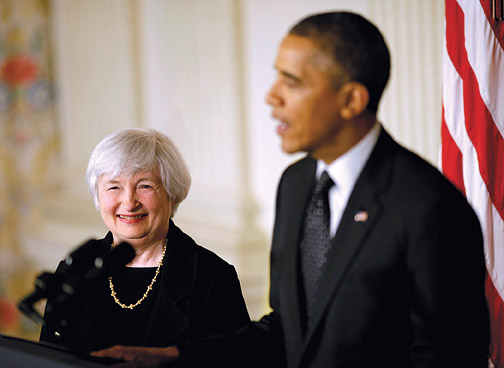 Courtesy AP
Yellen with President Obama.
Yellen, who will become chairwoman when she succeeds Ben Bernanke on February 1, has long been a familiar face in economic policy circles. During the 1990s, she took a leave from her faculty job at UC Berkeley to join the Fed as a member of the board of governors before moving on in 1997 to head the Council of Economic Advisers, where she regularly briefed President Bill Clinton. Before rejoining the Fed as vice chair in 2010, she served as president and CEO of the Federal Reserve Bank of San Francisco.

Yellen's nomination had broad support from Wall Street, monetary policy experts, and despite early grumbling, members of Congress. She is  widely admired for her analytical rigor and is a specialist in the causes, mechanisms, and implications of unemployment. Although she is expected to broadly continue Bernanke's approach, Yellen will likely put more emphasis on countering joblessness than on pounding away at inflation, the Fed’s traditional priority. In December she voted to begin easing the Fed's extraordinary efforts to revive the U.S. economy, an approach that has kept interest rates close to zero. As the economy recovers, Yellen's first task will be to oversee that easing.

Unlike many of her peers, Yellen is credited with having observed some of the earliest signs of the 2008 financial meltdown, the credit crunch, and the slow recovery; once the crisis  became reality, she pushed the Fed to make lowering unemployment a higher priority. In a February 2013 speech, Yellen described the “devastating” effect of long-term unemployment on individuals, and also argued that the phenomenon has “the potential to itself become a headwind restraining the economy.”

A professor emerita at Berkeley, where she has been a faculty member since 1980, she’d earlier taught at Harvard and the London School of Economics. Her initial focus at Brown wasn’t economics, but philosophy. In a prophetic 1997 BAM interview, Yellen said she switched after taking economics courses and learning about, among other things, how the Fed’s actions impact the overall economy.

Professors George Borts and Herschel Grossman “taught me that economics was a subject where a systematic way of thinking about the world translated into policy prescriptions with real social impact,” Yellen recalled. “I remember sitting in Herschel Grossman’s class and thinking, ‘Gee, I didn’t realize how much influence the Federal Reserve has on the health of the economy. If I ever have a chance at public service, [a Fed post] would be a worthwhile thing to do.’”

Reader Responses to Banker to the Nation