A Debt We Owe

Inside the entrance of Manning Hall hangs a marble tablet bearing the names of twenty-one Brown alumni who fought and died during the Civil War. Put there in 1866 on the day before Commencement, it honors men whose names have long been forgotten. Fifth on the list is Sullivan Ballou, class of 1852, a major in the Union army. 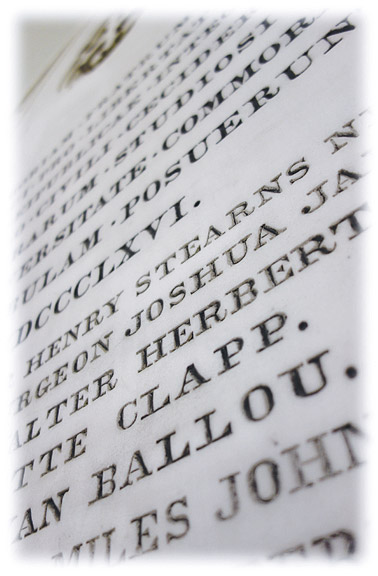 Ballou would have faded completely from memory, except that, when he died in the 1861 Battle of Bull Run, he left behind a letter he’d written to his wife, Sarah, a few weeks earlier.

“If it is necessary that I should fall on the battlefield for my country I am ready,” Ballou wrote. “I know how strongly American civilization now leans upon the triumph of the government and how great a debt we owe to those who went before us through the blood and suffering of the Revolution. And I am willing—perfectly willing—to lay down all my joys in this life to help maintain this government and to pay that debt.”

If the words sound vaguely familiar, it is because Ken Burns used the letter prominently in his 1990 documentary, The Civil War. It was paired with the series’ title theme music.

Unfortunately for Ballou, the aftermath of his death seems to have been horrific. Witnesses reported that his body was exhumed and decapitated. What remained, ashes and bones, is buried beside his wife in Providence’s Swan Point Cemetery.

Reader Responses to A Debt We Owe