Learning to Get Back Up

Before Sharon Cohen ’89 arrived in the early 1990s, you would have been hard-pressed to find many figure skaters in Harlem. Shortly after graduation, Cohen moved to New York City for a job at CBS News, when one day she saw a story about an ice hockey program in Harlem.

“I called to congratulate them,” she says. “In that conversation, I mentioned I was a skater. They said they had some girls who wanted to figure skate and asked if I would come meet them.” 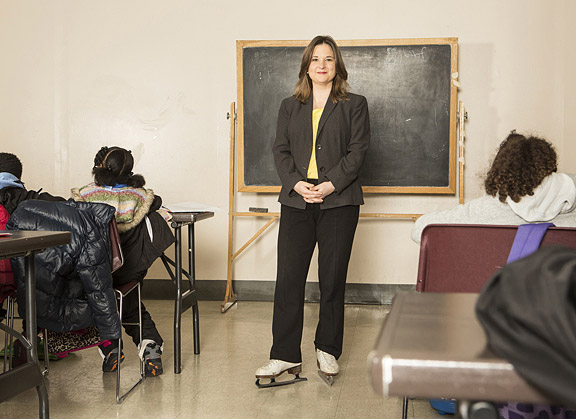 Dustin Fenstermacher
Sharon Cohen put aside a career as a documentary filmaker to teach figure skating in Harlem.
Cohen had never even been to Harlem, but she agreed to meet the girls. She soon began volunteering to teach skating to a group of children from P.S. 96 in East Harlem. “What inspired me,” Cohen recalls, “was watching them discover what they were made of. Once they got on the ice, they realized it wasn’t so easy to skate. I saw them push through the obstacles and really gain self-confidence.”

She continued volunteering for the next several years while working on a master’s degree from NYU and then embarking on a career as a documentary filmmaker. In 1997, however, she learned that her after-school skating program was about to close. After meeting with a group of committed parents, Cohen decided to establish the nonprofit Figure Skating in Harlem (FSH) and put aside her filmmaking career to become its executive director.

Cohen reached out to two fellow Brunonians for assistance: Wendy Walker ’89 and Cynthia Romano ’93, both former skaters. Walker, a lawyer, became the group’s first board chair, while Romano wrote a book detailing all the skating lessons that could be turned into academic subjects. “Without their support, I don’t think we would be here,” Cohen says.

From the start, the women’s ambition was to help girls achieve success in school. “Our program is first and foremost [focused on] education,” Cohen says. More than 1,000 girls between the ages of six and eighteen have gone through the FSH program. Each of them has maintained a B-plus average in school, and several have gone on to prestigious universities, among them Meiling Jabbaar ’15, who started with FSH when she was eight and stayed for ten years.

Program participants meet three to five afternoons per week. Before skating, they see tutors in small groups. FSH also has its own curriculum, which involves teaching the girls such topics as financial literacy, nutrition, and public speaking. After an hour and a half of tutoring and classwork, the students hit the ice.

In addition, FSH encourages students to participate in an off-ice conditioning program and summer classes. They can also join one of three competitive synchronized skating teams and go on trips to see theater and dance and explore possible careers. On one trip the girls went to Washington, D.C., to meet U.S. Supreme Court Justice Sonia Sotomayor.

“That was an amazing experience,” Jabbaar says. “We got to sit in a room and ask her questions. Also, it was great to hear her story of how she grew up in the Bronx, not too far from my mother, and how through her hard work she made it to the Supreme Court.”

“It is a holistic program,” Cohen explains. “We really want them to be well rounded and to appreciate the arts and athletics. We want them to understand that the decisions they make now could have great impact later.”

Other trips have taken the girls to the set of Law and Order: SVU and to ring the NASDAQ’s closing bell. Students have also viewed live surgery and met with an executive from Google.

Cohen points to Jabbaar, who joined the program as a shy girl and grew into a confident young woman, as a great example of the program’s success. “She had an inner determination, and found expression on the ice,” Cohen says. “She was a lovely skater, but, more importantly, a great person. She always gave back to the other girls. She blossomed. Skating gave her the ability to express herself.”

The program, which started with just three instructors and thirty-five students, now has a staff of more than fifty and serves more than 200 students each year. The demand continues to be as high now as it was when the program started.

She next hopes to expand FSH to other parts of the city and beyond. Someday, she says, FSH may even have its own skating and education center.

“Skating,” Cohen says, “is something that is learned very incrementally, so the students learn how to set goals. They learn how to persevere. They work through obstacles. It provides great life lessons, especially the whole notion of falling down and getting back up.”

Reader Responses to Learning to Get Back Up