It was clear that something major was brewing even before New York City Police Commissioner Raymond Kelly stepped up to the microphone on October 29. As the audience crammed into List Auditorium and an adjacent classroom, you could still hear protestors outside chanting, “No justice. No peace. No racist police!” 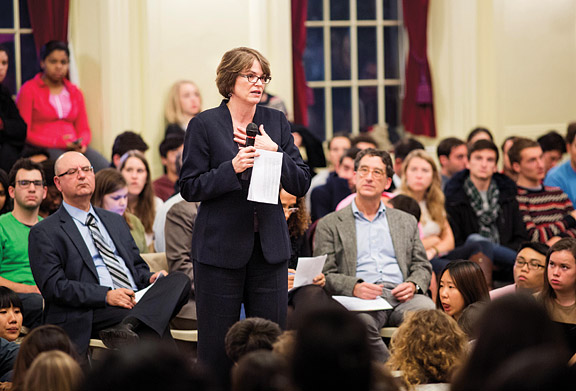 Arjun Narayen '17
Paxson, standing before professor Ross Cheit, speaks at the community forum on October 30.
Director of the Taubman Center for Public Policy Marion Orr, the host of Kelly’s lecture on “Proactive Policing in America’s Largest City,” sternly reminded the restive crowd of the importance of “open and civil discourse.” He warned that protests infringing on the rights of others “cannot be tolerated.”

In the days before the event, students had circulated an online petition demanding that the lecture, part of the Noah Krieger ’93 Memorial Lecture series, be cancelled. Orr had refused. When he announced that Kelly had “ensured ample time”—forty minutes—for questions, derisive snorts came from the crowd. It was not a good sign.

Orr pointed out that, in Kelly’s eleven years running the NYPD, the city’s murder rate had dropped to a fifty-year low, a decrease Kelly attributes to “stop-and-frisk,” a practice that permits police to detain pedestrians and search them for drugs and weapons. However, Orr continued in his introduction, the tactic has been used disproportionately against blacks and Hispanics, and he noted that last August a federal judge had declared it “indirect racial profiling” and unconstitutional. (The city has appealed.)

As soon as Kelly began to speak, student and community protesters—many of the latter members of a local group called Direct Action for Rights and Equality—jumped to their feet, fists raised, and recited a statement in unison. Each time Kelly tried to talk, protesters interrupted him. When a student objected, saying, “You are silencing my rights!” a man in the audience yelled back, “Go write an essay!” For nearly a half hour, Brown administrators tried to defuse the situation, but, unable to quiet the crowd, they eventually cancelled the speech and asked people to leave.

Reactions varied widely. Professor of Economics Glenn Loury, who studies the disproportionate number of African Americans in U.S. prisons and who has condemned stop-and-frisk in his writing, nevertheless shook his head angrily as he left the auditorium. “I have questions to ask [Kelly],” he said.

Outside, though, protesters were jubilant. “They refused to cancel the lecture, so we canceled it for them!” said one of the organizers, Jenny Li ’14. A few yards away several students of color discussed what they’d just witnessed. “I’m reeling,” said Richard Jiminez ’14, who lives in the Bronx. “I didn’t agree with Kelly heading into it, but I would have liked to hear him explain his views.” Another senior, Saeed Hassan, nodded. “As a black and a Muslim, I wanted to hear him answer tough questions.”

That evening, President Christina Paxson sent an e-mail to faculty, students, and staff that said she would personally apologize to Kelly for how he had been treated. “This is a sad day for the Brown community,” she wrote. “I appreciate that some members of our community objected to the views of our invited speaker. However, our University is—above all else—about the free exchange of ideas. Nothing is more antithetical to that value than preventing someone from speaking and other members of the community from hearing that speech and challenging it vigorously in a robust yet civil manner.”

The next night, she convened a forum “to begin a conversation, with the goal of bringing our community together.” More than 600 students, faculty, and administrators packed Alumnae Hall. “My own belief,” Paxson told them, “is that talking in person is the best policy—whether in families or in very large communities.” Professor of Africana Studies Tricia Rose, who directs the Center for Race and Ethnicity, praised the protesters’ courage. “How much time do you give to those who always have the mic?” she asked. History concentrator Dylan O’Farrell ’14 had a different view. “When one person’s rights are violated, all of our rights are violated,” he said.

Professor of Political Science Ross Cheit explained that Noah Krieger’s father, who had been sitting in the front row with his wife at the Kelly lecture, had chosen the police commissioner as this year’s speaker because liberal Democrats had spoken the last few years. “Mr. Krieger wanted to spark questions,” Cheit said. “He was looking forward to the Q&A.” Cheit warned that it could now prove difficult to attract unpopular speakers to Brown in the future.

Justice Gaines ’16, who said he’d helped plan the protest, offered an apology to those who wanted to ask questions at the Kelly lecture, but said, “You can’t leave race out of it.” He said the protest was not about ideas, but “about the safety of my body on this campus.” Safety outweighed freedom of speech, he concluded.

A number of questions remained to be answered, among them how the event could have been planned and managed better and what would happen to the students involved in the protest. On November 6, Paxson announced that she would establish a “Committee on the Events of October 29th,” saying, “In similar episodes that have occurred at Brown in the past, students who violated the Code of Student Conduct have been asked to accept responsibility for their actions.”

The committee would first establish the facts about what happened in the days leading up to the Kelly lecture and at the event itself. Depending on the committee’s findings, code of conduct proceedings could begin against some students. Paxson said the committee would then “make recommendations regarding how the University community can maintain an inclusive and supportive environment for all of our students while upholding our deep commitment to the free exchange of ideas.”

“I hadn’t realized how raw and emotional this issue is for a lot of students,” Paxson later admitted, “and for faculty who have been exposed to racial profiling too. “I think what students may not have realized is how strongly, especially at a university, we value freedom of expression.”

Reader Responses to Stop and Think