The Hound at Home 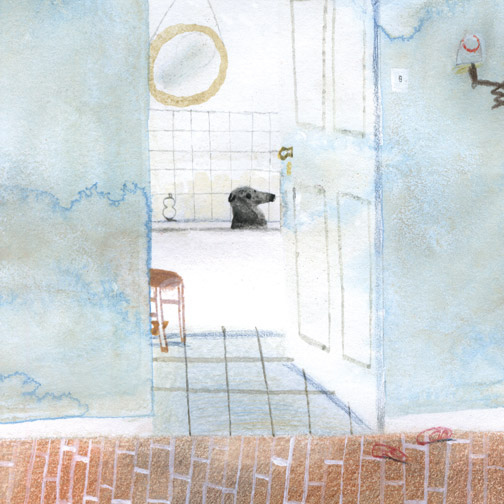 He is a beautiful, exotic, weird creature, with behaviors that are part pony, part mule, part feline, and part canine. Although he spends most of his time in repose, when he becomes excited he rears up on his hind legs like an agitated horse. More often he behaves like a mule insisting on one path alone, the one of his own bidding; he can exercise his right of free will by refusing to take a single step. On other occasions he will slip from room to room with the stealth of a cat. In the blink of an eye he can vanish, then reposition himself on another soft surface, once again fixing his inscrutable gaze upon me. While asleep he folds up in perplexing little knots, his spindly legs creating a woven pattern of paws.

Zachary is a creature of extraordinary elegance but questionable emotional stability. He seems tormented by fears. At the slightest hint of a thunderstorm he retreats to his safe spot, the bathtub. There he remains, shaking and inconsolable, his bony frame rattling against the porcelain tub.

When I first looked into adopting an ex-racing greyhound, I was outraged at what I had heard about the sport. Before the 1980s, when greyhounds were recognized as suitable for adoption into loving homes, thousands and thousands of retired racers were killed simply because they were no longer “useful.”

When Zachary came to my apartment for his adoption interview, he fell asleep. I decided to take him in, but it was difficult to imagine living with such a bizarre-looking creature. More than anything, I wanted to know his story, the story of racing greyhounds in the United States.
A historian, I focused on the cultural history of the sport, drawing on widely scattered and diverse archival sources. But I also conducted fieldwork, interviewing countless individuals who were either involved with greyhound racing or devoted to ending it.

Modern greyhound racing evolved from the ancient sport of coursing, which involves a judged contest between two greyhounds released to chase their quarry. After the invention of the mechanical lure in the early twentieth century, greyhound racing took off and was occasionally linked with mobsters, including Al Capone.

Although now in decline, greyhound racing was once the sixth most popular spectator sport in the United States. It attracted primarily the working-class, along with such celebrities as Frank Sinatra and Babe Ruth, and was marketed as the elite and glamorous “Sport of Queens.”

For many years greyhounds were viewed as a commodity valued only for racing. The adoption movement and the rise of pet keeping changed this, but both pro- and anti-dog-racing groups continue to argue over whether the sport is cruel. Debating the issue is confounding, given that the life of a racing greyhound still varies considerably from track to track, kennel to kennel, and dog to dog.

Most greyhounds readily adapt to domestic life. Zachary, now eleven, has utterly embraced it. He now spends his days languishing on my sofa and receiving admirers. I know my role in this domestic arrangement. I am the attendant to the Royal Hound.

Gwyneth A. Thayer, associate head and curator of special collections at the North Carolina State University Libraries, is the author of Going to the Dogs: Greyhound Racing, Animal Activism, and American Popular Culture.

Reader Responses to The Hound at Home