In August 2007, after hearing Pulitzer Prize–winning photojournalist Paul Watson interviewed on NPR, playwright and poet Dan O’Brien ’99 MFA e-mailed the photographer a fan letter. Although O’Brien never expected to hear back, the two began a nearly three-year-long correspondence that culminated in a meeting in the Arctic, where Watson invited O’Brien to join him on assignment. 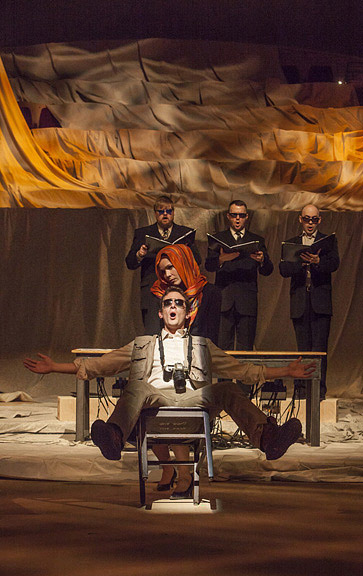 Joel Simon
O'Brien's opera, The War Reporter, tells the story of a traumatized journalist haunted by the people in his photographs.
The experience provided a rich vein of material for O’Brien’s writing. He turned the story of his relationship with Watson into a book of poetry (War Reporter), a play (The Body of an American), and an opera (The War Reporter). “I still can’t get over how bizarre and lucky the connection between Paul and me was,” O’Brien says. “If I truly understood it, I would have gotten bored and moved on already.”

At the outset of the two men’s correspondence, Watson was enjoying what most would consider a thrilling and successful career. Working for the Toronto Star and the Los Angeles Times, he covered wars around the world. Watson had won the Pulitzer Prize in 1994 for a photo he’d snapped of an American soldier being dragged through the streets of Mogadishu, Somalia, by a mob. The photo came to symbolize the limits of American power abroad and the dangers of foreign intervention.

But the image haunted Watson. He was certain that, just before he’d clicked the shutter, the dying soldier had told him, “If you do this, I will own you forever.” The photograph, Watson felt, exploited the dying man’s suffering and further desecrated his body for all the world to see.

At the time he first reached out to Watson, O’Brien was dealing with his own demons. During his childhood, O’Brien’s older brother had tried to kill himself. “This is a secret  we will take to our graves,” their mother had told O’Brien. He developed an obsessive-compulsive disorder, afraid to touch any surface and terrified to leave his house. And just before he’d reached out to Watson, O’Brien’s family abruptly stopped talking to him. He was disowned and had no idea why. Watson’s sense of despair, isolation, and disorientation resonated with O’Brien.

In his poetry O’Brien describes how the trauma of both men found expression through their correspondence. The poems are mostly in Watson’s voice, but they are also interspersed with O’Brien’s reflections on his own life. O’Brien begins to experience Watson’s trauma as his own. “Is the man running after me,” the poet asks of Watson, “the man who haunts you? And what could he want/from me?” War Reporter was shortlisted for the 2013 Fenton Aldeburgh First Collection Prize, one of the United Kingdom’s most prestigious prizes for a debut poetry book.

O’Brien’s play, which premiers at the Gate Theatre in London January 16, dramatizes the fits and starts of his relationship with Watson as each evades the other’s questions and runs from his own demons. In it, O’Brien anguishes over the insignificance of his personal turmoil when compared to the horrors Watson has witnessed. Watson, on the other hand, denies that courage was the motivation for his constant forays into war zones. He says he is running from himself and satisfying a morbid curiosity.

In Act II of The Body of an American, Watson invites O’Brien to join him in the Arctic. “There was a certain poetic resonance to the [Arctic],” O’Brien says. It’s there that the two men grow closer, each trying to exorcise his ghosts while surviving the cold. The play doesn’t offer any happy endings. Instead, it concludes that the most we can do is bear witness to one another’s trauma, which allows both people to recapture a bit of their humanity.

In the preface to his book of poems, O’Brien paraphrases from a letter Watson wrote when the two began to realize how much they had in common: “Do you know that quote of Camus’ where he says he’s solved the mystery of where war lives? It lives in each of us. In the loneliness and humiliation we all feel.”

Reader Responses to The War Within