It was a typical fight, the kind you might see during any NHL game, except that this one involved two former Bears. During the contest between the Dallas Stars and the Vancouver Canucks played in Vancouver’s Rogers Arena on February 15, 2013, the Canucks were not happy about a hit that Stars forward Ryan Garbutt ’09 had administered to one of their teammates. A message needed to be sent. 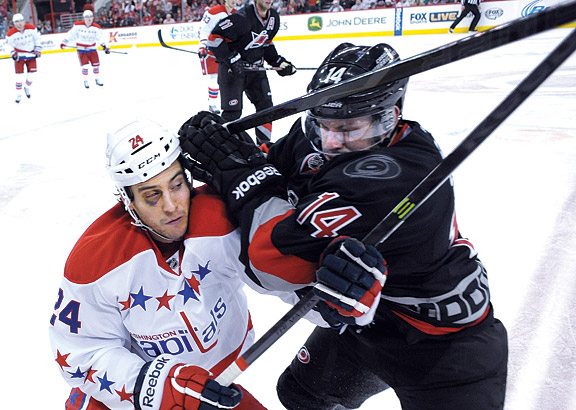 Grant Halverson/Getty Images
The Washington Capitals' Aaron Volpatti '10 (left) grinds it out against Nathan Gerbe of the Carolina Hurricanes in Raleigh on December 20, 2013.

And so, as the teams prepared for a face-off, the Canucks’ Aaron Volpatti ’10 skated toward his former teammate with an offer. “I said, ‘One of the guys is going to come after you,’” Volpatti, who now plays for the Washington Capitals, recalled. “I said, ‘I’ll fight you right now and let you keep your helmet on.’ He kind of thought about it and said, ‘All right, yeah.’”

And so the gloves came off, and the two players traded blows. Volpatti, who trained at a boxing club with his father while growing up in Revelstoke, British Columbia, landed some decisive lefts and came out of the fight with a black eye. Garbutt suffered a cut on his left cheek. One of the television announcers joked, “They went to Brown. They’re too smart for this, aren’t they?”

After the game, Volpatti and Garbutt got together for a beer.

Hockey fights, always controversial, remain popular among fans. They can be one of the best ways for a college-trained player to distinguish himself among prospects who may not possess the scoring prowess of a Sidney Crosby or an Alex Ovechkin. In fact, it may come as a surprise to learn that among the NHL players most willing to drop the gloves these days are Ivy League alumni. Because they usually don’t possess elite skills, they earn roster spots as grinders who punish opponents with body checks and a physical game that can include a willingness to fight.

“It gets you there a little bit sooner,” Volpatti, a former human biology concentrator, says. “It’s just another thing in your tool bag if you can do it.”

Among the bruisers are Princeton grads George Parros of the Montreal Canadiens and Kevin Westgarth of the Calgary Flames, while Dartmouth’s Tanner Glass regularly mixes it up for the Pittsburgh Penguins. (Glass and Volpatti were one-time Vancouver linemates.) Penguins prospect Bobby Farnham ’12 led American Hockey League rookies in penalty minutes last season, while Farnham’s current and former Brown teammate Harry Zolnierczyk ’11 also plays tough. Princeton’s Mike Moore, who’s with the Boston Bruins; Cornell’s Colin Greening, of the Ottawa Senators; and Scott Ford ’04, who plays for the AHL’s Milwaukee Admirals, are all known as scrappers.

“We grew up wanting to play in the NHL and live this dream,” Farnham says. “This is the only thing I can imagine doing right now. Whatever it takes to get to the next level is my goal.”

Along with fighting, however, comes the danger of administering or receiving a concussion, something about which these players are well aware. “I’ve definitely had my bell rung where I’m dazed,” Volpatti says, “but I’ve never had any lingering symptoms. I’m obviously not naïve about the situation, either. If something like that did happen a few times, then you might have to sit back and think about it. You’ve got a good education.”

Last November, Volpatti delivered a punch that resulted in a concussion for the Philadelphia Flyers’ Steve Downie, who had instigated the fight. Volpatti stopped punching when he realized Downie was hurt. While trying to make Vancouver’s roster during the 2011–12 preseason, Volpatti delivered a body check that injured a San Jose Sharks defenseman. That hit drew the attention of six-foot, five-inch, 230-pound Brad Winchester, who then went after Volpatti, who is six-foot-one and weighs 205 pounds. Volpatti’s one-punch knockdown of Winchester, who had to be helped off the ice, made headlines.

And Volpatti made the roster.

Volpatti, who turns twenty-nine in May, says he’s interested in helping research concussion effects after his NHL career. He knows life can change quickly: 35 percent of his body was burned in a 2005 camping accident.

“I just set goals as I went along,” he says. “The NHL wasn’t really a for-sure possibility until my junior, senior year of college, and I was already twenty-three, twenty-four years old. I want to play in the NHL as long as I can.”

Volpatti says that his wife, Claire, usually just says, “Stay away from the huge guys.” But to consider players like Volpatti goons is not a fair assessment. In recent years, rule changes have emphasized speed and scoring. Teams want toughness, but gone are the days when a player could make a career out of simply being an enforcer. Teams now prefer players who can skate, hit, and punch.

“We want to chip in more offensively and work on our skills,” Volpatti says. At Brown, Volpatti scored seventeen goals in his senior season, when he was team captain. Through 108 regular-season NHL games, he has had five goals and seventeen fights. The Capitals claimed Volpatti off waivers last season and signed him to a two-year contract that pays him an average of $575,000 per year. Not that all Ivy alums have to be tough guys. Buffalo Sabres forward Matt Moulson, a Cornell graduate, is a skilled goal scorer, and fellow Cornell alum Joe Nieuwendyk earned more than 1,100 career points and three Stanley Cup rings in his career.

Farnham, who grew up in Massachusetts, sees his role as building on his experience playing at Brown. He says that Ivy coaches recruit tough characters, because ECAC Hockey, the conference in which the Ivies play, “has always been a grind-it-out style. To compete in that league, you have to be tough and physical.” That style is also helping him play professional hockey. “My real role is playing an agitator,” he says, “to just get under the skin of the opponent.”

Farnham, a former commerce, organizations, and entrepreneurship (COE) concentrator, scored six goals and amassed a whopping 320 penalty minutes in his first pro season, playing mostly for the AHL’s Wilkes-Barre/Scranton Penguins. “You have to learn as you go,” he says. “My first year I took quite a few punches.”

Reader Responses to A Physical Game