Doug Donaldson ’85 never felt more helpless than on that day in 2005 when he began coaching his son’s second-grade basketball team. There he was, standing on the gym’s hardwood floor in front of a group of boys eager to emulate their NBA heroes. Although Donaldson had grown up playing sports and knew the rules, he had no idea how to teach basics to the youngsters. “I had to totally BS my way through it,” Donaldson says. “It was humbling. I thought, ‘I’m a basketball fan. Why can’t I do this?’” 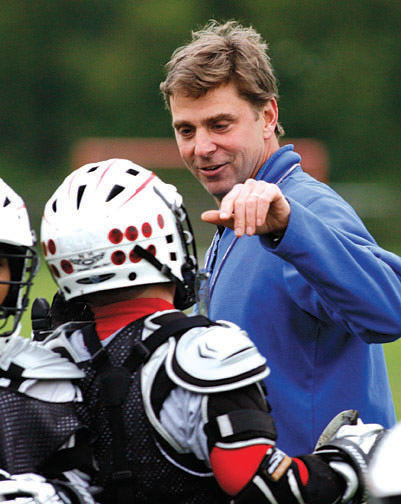 But Donaldson soon spied a business opportunity in all this. He pictured spirited yet clueless parents across the country with whistles around their necks and clipboards in their hands, desperate for guidance on how to coach youth sports successfully. Within months of his coaching debut, he founded PlaySportsTV in Princeton, N.J. The subscription-based service offers Internet videos instructing coaches how to teach sports.

“There are parents who are enthusiastic but don’t know how to do it,” says Donaldson, who still coaches youth lacrosse. “And then there are the ones who are worse, who think they know how to do it. We’re a first stop for a parent.”

The PlaySportsTV library includes more than 3,000 videos for more than a dozen sports, including baseball, football, and tennis. The videos feature pro athletes and prominent coaches. Former professional lacrosse star Mikey Powell teaches how to scoop up loose balls, while NBA guard Sasha Vuja gives tips on faking a jump shot. “Do not look at your defensive player and try to just a little bit raise your basketball so he flies like a mosquito next to you,” Vuja says before demonstrating the move.

Unlike coaching itself, filming the videos for PlaySportsTV was second nature for Donaldson, who had previously been a TV producer. He helped produce such sports documentaries as 1999’s Yogi Berra: Déjà Vu All Over Again for PBS and the 2006 Baseball’s Secret Formula, about statistics guru Bill James, which aired on Discovery’s Science Channel.

For now the company is “lean and mean,” Donaldson says, but already profitable. It attracts 7,000 users during peak times of year. Annual revenue is under a million dollars, and besides Donaldson, the company has three employees. He’s looking for a big payday by making the videos available on smartphones and tablets, the most common way subscribers use PlaySportsTV.

As for advice to first-time parent coaches, Donaldson recommends no more than three practices a week. “I worry that kids specialize too early on a single sport. It’s important for kids to play many different sports until they find their passion,” Donaldson says. “ Once you get into the formal setting of high school, practices are daily, and that’s fine.”

Reader Responses to Beyond Cheering