When U.S. Secretary of Labor Thomas Perez ’83 was twelve, the youngest of five siblings growing up in Buffalo, New York, his father died. A short time later, his mother was hospitalized. For Perez, it felt as if the entire world that his Dominican immigrant parents had worked to create was collapsing. “I’ve had better summers than the summer of 1974,” Perez commented. “Kind of like Richard Nixon, I bet.” 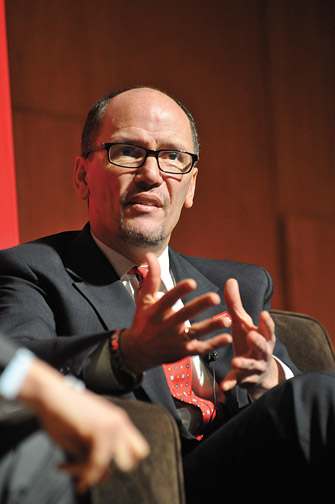 Frank Mullin
U.S. Secretary of Labor Thomas Perez '83 describes the values and experiences that led him to the White House.
Perez noted this during a keynote address in which he combined insights into his remarkable rise through the ranks of American politics with an elucidation of his principles and beliefs in the Obama administration. “It starts with luck,” he said of his success. “It continues with great family, support, mentors in the community and here at Brown, shoe leather, and some more luck.”

At Brown, he said, he encountered a broader range of people and ideas than he’d ever experienced. “I hate the word tolerate. I tolerate brussels sprouts,” he said. “Brown taught me to embrace diversity.” His mentor wound up being political science professor Edward Beiser, a remarkable pairing, Perez said, of a Catholic from Buffalo and an Orthodox Jew from New York City.

Perez described his personal philosophy: “There is no such thing as failure. There are only learning experiences.” He said his mother always taught him that “when a window closes, other doors emerge.”

Perez said he strives to keep morale high and seek constant input from the people who work for him. “I’m not embarrassed to tell you, I’ve not had an original idea in my entire life,” he said. “I’m not kidding. But I pride myself on being an active listener.”

As labor secretary, Perez is pursuing a hike in the minimum wage, out of the belief, he said, that “nobody who works a full-time job should have to live in poverty…. If you work a job, you should be paid a fair wage.” Though critics accuse him of slowing economic growth by increasing government bureaucracy, Perez said, “Common-sense regulation is totally consistent with a better return on investment.”