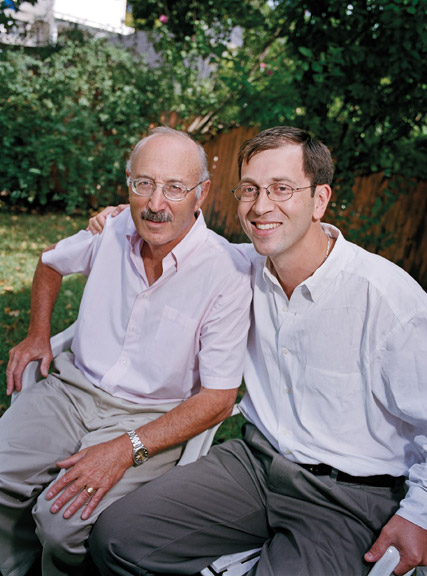 When Maxim D. Shrayer ’89 was eleven and living in Moscow, his parents applied to emigrate. Both enjoyed successful careers, but they were Jewish and knew that widespread anti-Semitism would limit their son’s opportunities. This was in the late 1970s, and, with tens of thousands of Jews leaving the Soviet Union for either Israel or the United States, Shrayer’s parents expected to follow.

Instead, Soviet officials denied their exit visa, and they became refuseniks—individuals, mostly Jews, who were refused exit. In his memoir Leaving Russia: A Jewish Story, Maxim Shrayer describes what it was like to live in this limbo. As word got out that they had been seeking to leave, his family became persecuted for their religion and presumed lack of patriotism. He had had a “happy childhood,” Shrayer writes, but as refuseniks, the family was plunged into what he said in an interview was one of the “blackest periods of our family history.”

Shrayer, now a professor of Russian, English, and Jewish Studies at Boston College, lives in Brookline, Massachusetts, with his wife, Karen Lasser, and their two daughters. The cofounder of BC’s Jewish Studies Program, he has published more than ten books of nonfiction, criticism, biography, fiction, and poetry. An earlier memoir, Waiting for America: A Story of Emigration, described several months his family spent in Europe after the Soviet Union finally agreed to grant them exit visas in 1987. Shrayer says when he published Waiting for America, his wife warned him, “People are going to want to know what happened prior, what was it like to grow up Jewish in the USSR.” She was right, and he began working on Leaving Russia as a prequel.

Shrayer’s father, David Shrayer-Petrov, was a senior research scientist with a PhD in microbiology, but once he became a refusenik he was fired. Since he had also gone to medical school, he picked up work as an emergency room doctor, a job that required long hours and was poorly paid. To support his family, he took a second job as a gypsy taxi driver, giving rides to black marketers and prostitutes late at night. The Union of Soviet Writers, of which he’d been a member, published a poem aimed at shaming him. It was called “To the Poet Who Abandoned His Motherland.”

Shrayer hoped to become a doctor like his father, but he and his parents believed no medical school would accept a refusenik Jew so he applied to Moscow State University’s School of Soil Science, which admitted one or two Jews each year. Still, Shrayer says, the professors devised ways to deny him entrance. Thanks to his intelligence, persistence, and an extraordinary amount of studying, he finally got in.
Shrayer’s parents waged a fierce battle to obtain an exit visa, working with foreign journalists and human rights groups. In February 1987, his mother was beaten by plainclothes Soviet agents while protesting in support of an imprisoned refusenik. His parents “drew their strength from within, from their convictions and the notion that they were Jewish parents rescuing their child,” Shrayer says.

Shrayer believes his “hyphenated identity”—Russian, Soviet, Jewish, and American—is a combustive mix that leaves him feeling like an insider and outsider all at once. When he visits Russia, he says, he feels like a “comprehending alien”—he understands what’s being said around him, but it all seems distant. In the United States, he experiences an internal dialogue he describes as “counterpoint”—“a dialogue of seemingly mutually incompatible perspectives and points of view.”

When Shrayer’s family finally arrived in the United States in August 1987, Brown became their landing place. His father found work as a researcher at Brown’s medical school, and his mother was hired to work at the Rockefeller Library. The story of how their son adapted to America could make for its own memoir. “People ask whether there’s going to be a third book,” Shrayer says. “I don’t know.”

Reader Responses to Life in Limbo