This  Memorial Day weekend, the University celebrated three things: the awarding of 2,440 degrees to seniors  and medical and graduate students; the reunions of more than 3,000 alumni; and the University’s 250th anniversary. 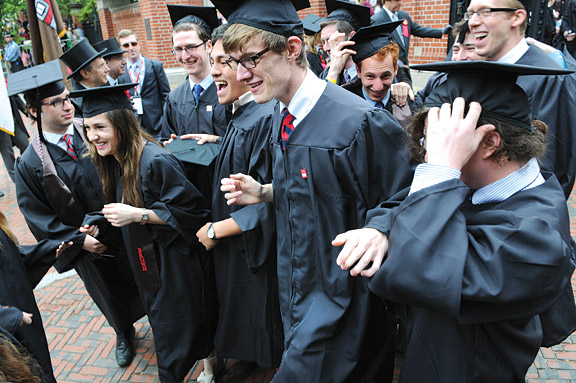 Frank Mullin
We made it! The class of 2014 charges through the Van Wickle Gates.
As thousands of alumni, faculty, and administrators lined College Street for the May 25 procession, imagining the College’s modest beginnings was a little surreal. The first graduating class, in 1769, contained only seven members, all of them men, and they received their degrees in the Baptist church in Warren, Rhode Island, across Narragansett Bay. The issue of the day was the viability of an independent American state.

In contrast, the campus overflowed with people on the day before Memorial Day—a holiday meant to remember the men and women killed while protecting the American state the class of 1769 could only imagine. With their cars parked all over Providence’s East Side, alumni and graduates’ families thronged anywhere a foot of space could be found, and they patiently waited their turn to march in the procession or to cheer its progress. Its destination? The First Baptist Church in America, another splendid piece of history that served as a setting for the countless selfies and tweets the occasion produced.

Across the campus, festive red and brown banners reading Imagine Brown: 250+ hung from lampposts, highlighting the anniversary of the 1764 signing of the Brown Charter. Rhode Island Hall hosted an exhibition reimagining Brown’s “Lost Museums,” especially the Jenks Museum of Natural History and Anthropology, which had occupied the building from 1871 to 1915 (see “Ghost Story,” Finally, page 72).

All of this year’s honorary degrees went to alums—one, children’s author Lois Lowry ’58, author of The Giver, finally was able to collect the Brown degree she’d put on hiatus to marry and raise a family more than a half century ago (see page 22). Another, ecologist Nalini Nadkarni ’76, a pioneer in the study of forest canopies and a lifelong devotee of trees, delivered a Baccalaureate address as unconventional and inspiring as Brown’s all-inclusive pan-religious service.

After marveling at how trees are rooted in the earth while reaching for the sky, Nadkarni directed seniors to “Stand up and turn your cell phones on!” Then she exhorted them to flash tweet their “sky dreams” and life goals. The responses ranged from the local (“a safe university for all future students”) to the global (“helping Libya toward peace and stability”). And then came the personal: “professional samba dancer!”
From the vitality of the graduating seniors, it was clear that, after 250 years of evolution, Brown is as ready to look ahead as it is to ponder the past.