Everything Changed My Senior Year

By Larry Rand ’64 / July/August 2014
July 2nd, 2014
There is something about the number 50 that triggers an emotional response in most people. Is it the onset of “middle age?” Is it the numerator that marks a half century? Is it the Golden Anniversary of, well, anything? For me and the Reunion Class of 1964 (Brown’s Bicentennial Class for those who are celebrating the University’s 250th anniversary), it brings me and, I suppose, my fellow classmates back to an event that happened in the fall semester of our senior year and a day that will live forever in my mind and in the minds of Americans for generations to come. 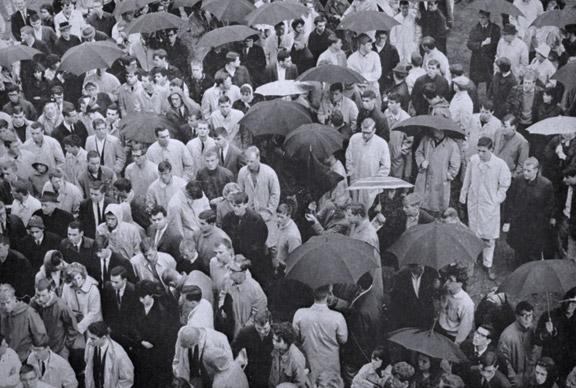 Brown Archives
The day after JFK died, a Syles Hall memorial drew a somber overflow crowd.
I will never forget that day. How brightly the fall sun struck my skin as I walked across the College Green from Professor Hedges’s American History class in Manning and strolled with my dear friend, David Garbus, to Mrs. Kay’s sandwich shop. It became a ritual for the two of us to scrape enough money together to escape the Ratty and splurge at Lloyd's: a grilled ham and cheese with a vanilla Coke for me, and pastrami or corned beef and a regular Coke for David.

Following lunch on November 22, 1963, David headed back to the Kappa Sigma house, where the weekend was already in full swing. I meandered down Thayer to window shop before wandering down Prospect to my Faunce House mailbox. My desultory walk was interrupted by snippets of news emanating from some of the stores. Something was happening in Dallas concerning the president.

I sprinted to Faunce and reached the Blue Room television in time to see Walter Cronkite take off his glasses and announce that John F. Kennedy had been shot in Texas. Shot and killed. The room, now packed, fell silent. People started to cry. Our world had just been turned upside down and changed forever.

Still in a daze, I went to the mailroom, opened my box, and tossed out a few meaningless pieces of junk mail, but not before I heard someone (yes, I remember his name) yelling into a pay phone: “Sell all of my stocks. Now!”

I recall that, as I walked out the door and headed toward Carrie Tower, I passed a nun in front of University Hall. I said, “Sister, please pray for us.” She looked startled and asked if something was wrong. I said the president had been shot. She let out a horrific and mournful scream, and as her knees buckled I gently held her up. I then headed toward the fraternity house, at which on most Friday afternoons the stereo would be blasting and the beer would be starting to flow. Not this day. Except for the television set that repeated the awful and still unbelievable news coming from Dallas and Washington, the place was silent.

It is said that there are moments in our lives when an event becomes embedded in our memories like an insect that can be trapped and preserved forever in amber. November 22, 1963, is such a moment for me and I would guess for the members of the class of 1964. But for Brown the event has a special meaning: in November 1960, Providence had been the last of JFK’s campaign whistle-stops before he returned to Boston for his final pre-election rally. It was also the place where I, as a newly minted freshman, went downtown to hear the young presidential candidate deliver his speech. But in November 1963 I was preparing to graduate and leave Brown, the place where I witnessed the birth of the New Frontier and the death of Camelot.
What do you think?
See what other readers are saying about this article and add your voice.

Reader Responses to Everything Changed My Senior Year