Chancellor's Professor of Physics Gerald Stanford Guralnik, a much-loved Brown professor who mentored generations of students and younger colleagues and was considered a front-runner for the 2013 Nobel Prize in physics, died April 26 of a heart attack. He was 77. 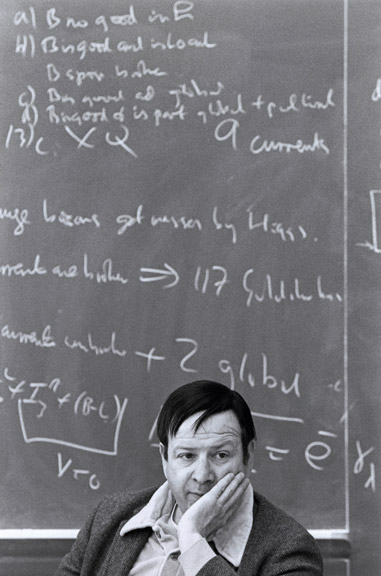 John Forasté/Brown Archives
Gerald Guralnick as a young professor.
Guralnik was one of six scientists who in 1964 published landmark papers on particle physics that would ultimately explain one of the biggest mysteries in science: why mass exists. He and his coauthors described an invisible, molasses-like force field that slows subatomic particles moving through it so that they acquire mass while other particles (photons, for instance) zip around the universe unencumbered. The two other papers described a similar mechanism.

The three papers sparked a fifty-year quest that involved thousands of scientists worldwide in the search for what became known as the Higgs boson. Named after British physicist Peter Higgs, it was dubbed “the God particle” by the nonscientific press. The search ended in July 2012, when physicists at CERN’s Large Hadron Collider in Switzerland proved the boson’s existence, demonstrating that the 1964 theorists were correct.

Last fall the Nobel committee awarded the top physics prize to Higgs and Belgian physicist Francois Englert, authors of two of the original papers. Nobel rules stipulate a maximum of three recipients, all of whom must be living, and Guralnik, his coauthors C.R. Hagan and Tom Kibble, and Higgs’s coauthor Robert Brout, who died in 2011, were not honored. “I’d be lying if I said it doesn’t sting a little,” Guralnik told the Wall St. Journal after the announcement, but, he added, “We are amazed and delighted that our mathematical exercise turned out to play a huge part in describing how nature works.” For their work he and the other surviving authors received the 2010 J.J. Sakurai prize for theoretical particle physics. Guralnik was a fellow of the American Physical Society and an Alfred. P. Sloan Research Foundation Fellow.

As important as Guralnik’s early work turned out to be, it was scorned initially. Science legend Werner Heisenberg, who had won the Nobel Prize in Physics in 1932, told him it was junk. “That was pretty scary for a young man who wanted to get a job,” Guralnik said in a videotaped lecture on YouTube. Guralnik wrote in the Huffington Post that another physics giant, Robert Marshak, “told me if I wished to survive in physics I must stop thinking about this sort of problem and move on. I wisely obeyed.”

In 1967 Guralnik joined the Brown faculty, where he focused on quantum field theory and computational physics and became an anchor of the physics department. “Gerry was above all a kind and generous man, as well as a beloved colleague,” department chair James Valles said. “In addition to his unique and lasting contributions in theoretical physics, he was a passionate teacher who mentored countless undergraduates, graduate students, and junior faculty members. We will miss him deeply.”