How did we become such a nation of worriers? That’s the implicit question that underlay “The Aging Brain: An Owner’s Manual,” the Frank and Joan Rothman Lecture given Commencement weekend by Martin Allen Samuels, chair of the neurology department at Boston’s Brigham and Women’s Hospital and a professor of neurology at Harvard Medical School. 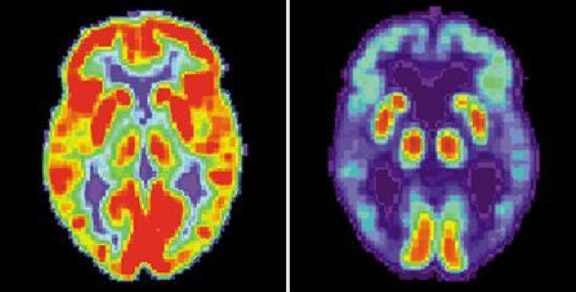 Reuters/National Institute On Aging
A split-view image showing PET scans of a normal brain, at left, and a brain with Alzheimer's disease.
The room in Smith-Buonanno Hall was packed with worriers, who had begun lining up a half hour early and who were now seated even in the aisles and on the floor. They had come to learn about their own aging brains or that of a parent or other loved one afflicted with Alzheimer’s. Those who came hoping to hear tips about caring for an Alzheimer’s patient may have disappointed; but Samuels did a masterly job of explaining the science behind dementia and the often irrational fear of baby boomers—fanned by media fascination with Alzheimer’s—that they may be exhibiting early symptoms of this terrible disease.

Samuels began by describing the normal aging of the brain—it shrinks and gets lighter—and the amyloid protein that is present in the brains of Alzheimer’s patients. This protein causes a gradual buildup of plaque that interferes with brain function. By the time symptoms are evident, he explained, it’s too late.

“If a treatment for this is to be developed,” he said, “it has to be preventive. I believe there will be a time when we will diagnose Alzheimer’s in utero.” There, he continued, it will be treated, essentially wiping it out as a threat.

Other kinds of dementia can also disable the aging brain, Samuels said. Some are even caused by the same things that trigger stroke and heart disease. As for preventing dementia, he said: “What’s good for the heart is good for the brain: keeping cholesterol down and exercising regularly prevent heart disease, stroke, and dementia. There is no evidence yet that mental exercise [crosswords and brain exercises, e.g.] prevents Alzheimer’s.”

Samuels also expressed alarm at the number of patients he sees who suffer from a new syndrome. “Fear of dementia,” he said, “is reaching epic proportions.” Patients complain that they no longer can remember the location of their car keys or their colleagues’ names. This, he sighed, may simply be an indication that the person needs a vacation.

Samuels also expressed concern at how many patients now demand sophisticated and unnecessary tests. “Imaging and genetic tests are the worst,” he said, because the information gleaned from them may indicate a possible problem many years in the future. How is a patient’s life made better by having that knowledge?

His advice? “Enjoy your life.”