After 56 years and an untallied number of lectures and students, Nobel prize–winning physicist Leon Cooper is calling it quits. “It’s just time” to stop teaching, he says. “It’s good to quit when you’re at the top of your game.” (He will continue with his research.) 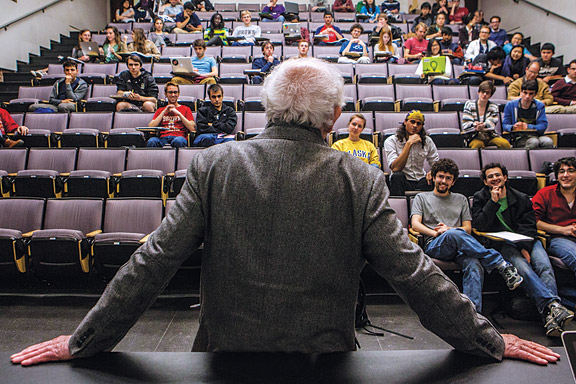 Michael Cohea
"Pick something you'll be passionately interested in," Cooper advised, "because if you do, you'll be willing to work hard."
Cooper, the Thomas J. Watson Sr. Professor of Science and director of the Institute for Brain and Neural Systems, won the Nobel in 1972 along with John Bardeen and Robert Schrieffer for their work on superconductivity. A member of the National Academy of Sciences, he also has an arrangement of electrons named after him: the Cooper pair. And the name of Sheldon Cooper on The Big Bang Theory is partly a tribute to him. Although he will no longer be teaching at Brown, Cooper plans to keep conducting research, chasing down grants and collaborating with colleagues at Brown and beyond.

To the non-physicist, his final lecture, part of his class “Flat Earth to Quantum Uncertainty: On the Nature and Meaning of Scientific Explanation,” was a bit of a challenge, touching as it did on quantum mechanics, the Dirac vacuum, the decay of positronium, and electrodynamics. “Any questions so far?” he asked about halfway through. “It’s all obvious, isn’t it?” No hands were raised.

Fortunately, the lecture was not all science. He also reminisced about his friendship with famed physicist Julian Schwinger—“the greatest calculator since Newton”—and scientist Richard Feynman—“quite a character.” Cooper recalled when Schwinger once gave a presentation at a conference in which he explained the number of days he’d spent on his calculations to prove his new theory. Feynman stood up afterward and said, “I can do that much more quickly.”

But students at the final class, which was held on April 24, wanted to know more about Cooper himself. At the end, when he invited questions from students, they asked mostly about his career and life. Here’s an edited sampling:

Q    Can you offer us some advice?
A    Pick something you’ll be passionately interested in because if you do, you’ll be willing to work hard. And you have to work hard.… That’s my advice. Other advice comes at a high price.

Q    What would you tell someone who’s bored with science?
A    You’re missing something wonderful.

Q    Why did you choose physics?
A    I thought, if I don’t understand physics I am never going to understand this deep stuff. It’s easier to understand biology than it is physics.

Q    How has Brown changed since you arrived?
A    It used to be, you’d go over to the president’s office, you’d say, ‘Barney [Keeney], how about doing this?’ He would say, ‘That’s a good idea. Let’s do it.’ Now you have to go through twenty-five committees.

Q   What do you plan to do after this class?
A    I’m just going to relax for a while.
What do you think?
See what other readers are saying about this article and add your voice.