Research By the Dozens

Political science professor Ross Cheit calls it “extreme research.” To help him track down material for his recent book on child sexual abuse, The Witch-Hunt Narrative, more than eighty students joined in to help hunt down primary sources. 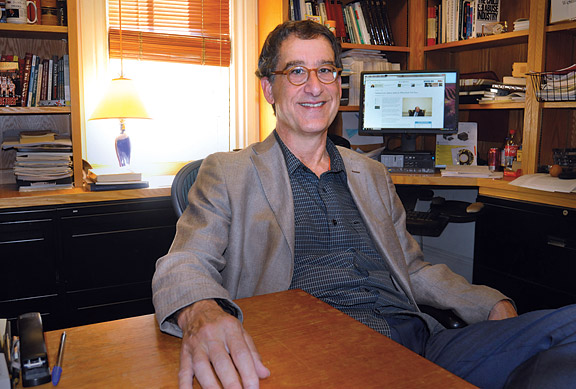 Frank Mullin
Fortunately, I am at Brown, where you can treat undergraduates as if they're graduate students," Cheit says.

Ben Petrosky ’03, for example, was his “media sleuth.” While working as a Cheit research assistant during his junior and senior years, he tracked down the author of an unsigned Playboy article, retrieved videotapes of news shows from the 1980s, and read through trial transcripts gathered from courts around the country. Cheit once sent Petrosky to the Berkshires in Massachusetts to confirm that a road mentioned in a court record still existed. It had been overgrown with weeds for years, but Petrosky found it.

More than fifteen years in the making, The Witch-Hunt Narrative examines dozens of child sexual abuse cases from the 1980s. Over time, these cases ensnared dozens of defendants, some of whom were eventually cleared of any wrongdoing. Many experts believed these prosecutions came about when interrogators asked young children leading questions, resulting in a witch-hunt in which wrongful accusations were made against thousands of people.

Thanks in part to the work of Brown students, Cheit reviewed all the so-called witch-hunt cases and concluded that most of the charges brought against child molesters were grounded in some truth. At the very least, he says, there was enough credible evidence to begin police investigations.

Cheit, who holds a law degree and is also a professor of public policy, believes we are far too quick to dismiss the accounts of young children. “We have, over the last twenty years,” he writes in The Witch-Hunt Narrative, “discounted the word of children who might testify against sexual abuse. We have become more worried about overreacting to child sexual abuse than we are about underreacting to it.”

What makes Cheit’s project especially remarkable is the number of undergraduates who contributed to it. “Fortunately,” he says, “I am at Brown, where you can treat undergraduates as if they’re graduate students.”

Morriah Horani ’02 began working with Cheit in her sophomore year and continued doing research for him for a year after graduation. She says she investigated “deep in the recesses of the bowels of the court system,” providing summaries of cases to Cheit, who discussed them with her at length and helped her refine her analyses. Now an attorney in Maryland, Horani says, “He had such a huge impact on my life. He taught me to think like a lawyer.”

Eric Tucker ’02 says he found Cheit’s commitment to hunting down the truth inspiring. “Through his own insistence on working to contribute to the struggle for human dignity,” Tucker says, “Cheit taught us about how to compose a meaningful adult life.”
What do you think?
See what other readers are saying about this article and add your voice.

Reader Responses to Research By the Dozens