Smiling at the Ballpark

Growing up in Brooklyn, Eric Nadel ’72 was a Dodgers fan, but when he was eight years old he heard Mel Allen and Red Barber broadcast a Yankees game on the radio. “That’s what I want to do,” Nadel announced. A few years later, he bought a reel-to-reel tape machine and began recording his commentary for games he watched on television. 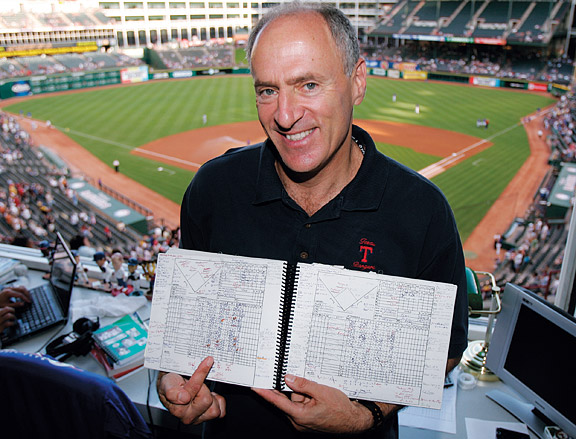 Tim Sharp/AP Photo
This season was Nadel's 36th as the radio voice of the Texas Rangers.
On July 26, Nadel joined writer Roger Angell and TV broadcaster and major league catcher Joe Garagiola in receiving the highest honor a baseball broadcaster or writer can achieve: recognition in the National Baseball Hall of Fame and Museum. Nadel earned the Ford C. Frick Award, which commemorates major contributions to baseball broadcasting. (Angell was awarded the Baseball Writers’ Association of America’s J.G. Taylor Spink Award, while Garagiola was honored with the Buck O’Neil Lifetime Achievement Award.)

“I’d like to accept this award for every kid who has ever tucked a transistor radio under his pillow to listen to a game after his parents had made him go to bed,” Nadel said at the award ceremony. “And all the kids who played Strat-O-Matic baseball, making believe they were announcing the games as I did.”

This season was Nadel’s 36th as the radio voice of the Texas Rangers. “Each day I walk into the ballpark,” Nadel told the BAM in 2004, “it puts a smile on my face.” Nadel broadcast the August 1989 game in which Nolan Ryan recorded his 5,000th strikeout, and was in the radio booth for Ryan’s 300th win. He has called the Rangers’ six trips to the playoffs, including the team’s two American League pennants in 2010 and 2011. His signature home run call, “That ball is history!” has become well-known to Rangers fans.

At Brown, Nadel called hockey and football games, then spent a few years broadcasting minor-league hockey in Michigan, Oklahoma, and Texas before the Rangers hired him in 1979. Along with the highlights, Nadel says, he has been there for all the seasons when the Rangers struggled in the standings. “As announcers,” he told the BAM, “we are the ambassadors of hope. It’s much harder when the team isn’t playing well or the team is out of contention. You need to come up with more to keep the audience entertained.”

As more Latin American players joined major league teams, Nadel learned Spanish to communicate better with them. “I started in 1990 so I could talk to Ruben Sierra, who was by far our best player,’’ Nadel said during the Hall of Fame festivities in Cooperstown, New York. “I knew we had more Latino players on the way.” Nadel occasionally calls an inning on the Rangers’ Spanish broadcast, and in December he will host a baseball tour of Cuba.


Some details in this story were taken from a 2004 BAM profile of Nadel by Zachary Block ’99.

Reader Responses to Smiling at the Ballpark