If there was a theme to this year’s Opening convocation ceremony on the College Green, it was that talking about controversial political and social issues isn’t easy. 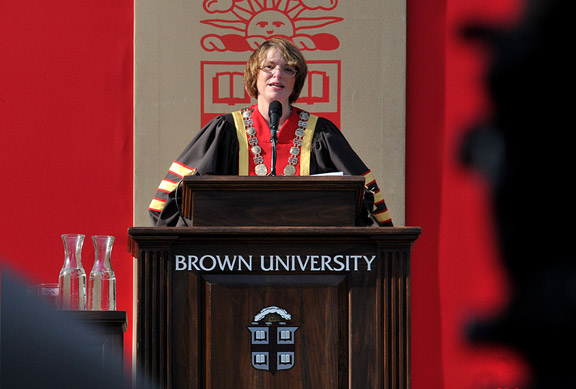 After declaring that Brown’s 251st academic year had officially begun, President Christina Paxson launched into a history of the Brown curriculum and a celebration of the freedom it offers students, a freedom whose popularity is largely responsible for the University’s acceptance rate of under 10 percent. As she described to the class of 2018 how the curriculum has evolved over the past 250 years, Paxson emphasized its influence in shaping Brown’s culture as “a university that is unafraid to confront the most difficult issues that society faces.”
Referring to the big three controversies of the last academic year—Brown’s decision not to divest from coal, the shouting down of New York City police commissioner Ray Kelly, and the administration’s response to sexual assault—Paxson emphasized that Brown would not shy away from confronting tough issues.

“Universities,” she said, “are designed to be places where new and sometimes conflicting ideas about social and political issues are expressed and evolve. The social and intellectual diversity of our community, which we cherish, is certain to produce strongly held and often divergent points of view. Without question, if we do this well, you will interact with people at Brown who see the world very differently from you.” 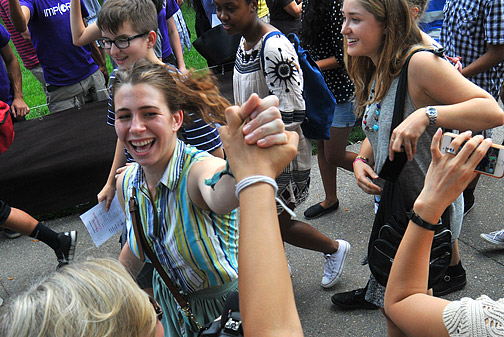 Frank Mullin
Incoming students celebrate having just past through the Van Wickle gates.

The afternoon’s headliner, new provost Vicki Colvin, stayed on safer ground, joking that her speech, “Fresh Eyes,” would feature something the new students have had experience suffering through before: an older person—her—giving them advice. She detailed how as a passionate student of science—“I’m a very quantitative person”—and the daughter of two scientists, she began her undergraduate studies at Stanford by taking as many science courses as she could.

The great benefit of Brown’s curricular approach, she argued, is the ease with which students can avoid her mistake of having such a narrow focus. “I took too many science courses,” she insisted, adding that “my second mistake was thinking that college is simply preparation for a career.”

She offered three pieces of advice to incoming undergraduates. First, “make friends.” Take the time to get to know your fellow students, and build a community of academic and personal support. Second, “Be deep and broad in your choices.” While developing “a deep, disciplinary identity,” strive for balance: “Do not sacrifice your wide exploration of this open curriculum.”

And third, ask questions and challenge your professors. “You are the last children of the twentieth century,” she said, bringing fresh ideas and fresh questions to those of earlier generations. Blessed with “the youthful gift of inexperience,” the incoming students gathered on the College Green have an opportunity to improve the world in a way that their teachers have not. “Do not let our failures,” she said, “hold you back in any way.”

Reader Responses to Don't Hold Back