At times this winter it seemed everyone was grumbling about the weather. Storms battered the College Green almost every week. Temperatures well below freezing turned sidewalks icy and treacherous. Classes were canceled. Parking was impossible, and almost 100 inches of snow fell, most of it in February. 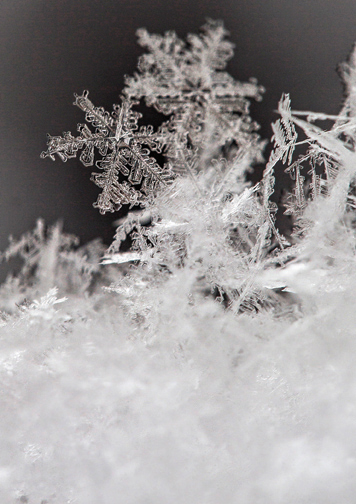 Many a Brunonian wondered, “Dear God, when will this be over?”

Streetside snowbanks, as tall as a Brown student and just as stubborn, soon grew tiresome, but up close—really up close—snow is beautiful.

An aggregation of ice crystals that changes shape as it falls through the atmosphere, every snowflake is its own marvel. You watch them falling en masse and know that it’ll soon be time to shovel—again. But examine a snowflake in isolation and you’re lost in the glory of nature.

Despite what you’re told as a kid, it’s possible in theory for two flakes to be the same. But they are made of so many billions of molecules that the probability is close to zero.

By late February, despite all the snow, cardinals were singing spring songs around campus, vivid red feathers fluffed up above white expanses of frozen flakes. On the rare day the temperature rose above freezing, bundled-up students picked their way through slush, showing no awareness that, soon enough, shorts and flip-flops would return.