Vietnam Through a Lens

When Catherine Karnow ’82 was growing up in Hong Kong during the 1960s, she was too young to understand why her family was living in Asia. She knew that her father, the Pulitzer Prize–winning journalist and historian Stanley Karnow, often traveled to Vietnam, the country just to the south, but she did not know what he did there. She didn’t know, for example, he had been covering the Vietnam War since 1959, the year the first Americans were killed in the country. Karnow, who later was the chief correspondent for the landmark PBS series Vietnam: A History, earned a spot on President Richard Nixon’s enemies list for his reporting during the war, but he also counted among his friends many of his generation’s best journalists and diplomats, including the late U.S. ambassador to the U.N. Richard Holbrooke ’62. 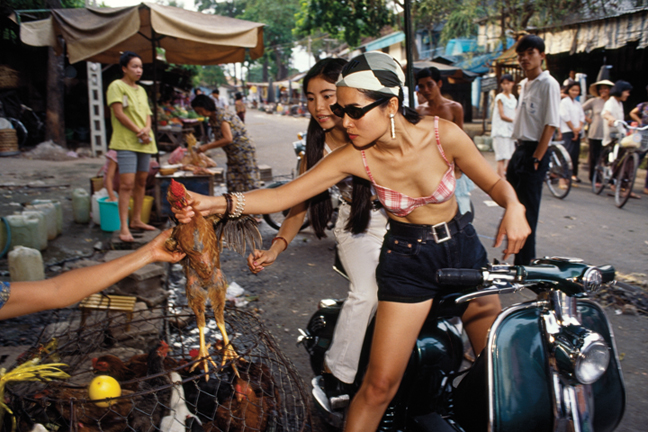 Catherine Karnow
Phuong Anh Nguyen fled Vietnam at age 13 and grew up in Pasadena, California. In 1992 she went back and opened Saigon's hottest bar, the Q Bar. Her years abroad have had their effect-the traditional Vietnamese way to grab a chicken is by its legs, not the neck.
As a child in Hong Kong, and even as a student at Brown, Catherine Karnow never imagined that Vietnam would play almost as large a role in her life as it did in her father’s. There’s a difference, though. While Stanley Karnow wrote articles for such publications as the Washington Post, Time, and the London Observer to satisfy the curiosity of the world about the war and to help shape a furious U.S. debate about its merits, Catherine Karnow has spent the last twenty-five years publishing photographs to counter the impulse to forget about a country where more than 58,000 U.S. military personnel died in a war the United States eventually abandoned in defeat.

April 30 this year marks the fortieth anniversary of the day the United States closed its embassy in Saigon and left in hovering helicopters filled with as many South Vietnamese as they could carry, just as the Viet Cong and the North Vietnamese army were taking the city. In the years that followed, the war arrived again and again in the United States as waves of “boat people” and their relatives fled the communist regime, eventually establishing thriving immigrant centers in communities as varied as Westminster, California, and Dorchester, Massachusetts.

In Dorchester, as a reporter for the Boston Globe Sunday Magazine in the 1980s, I attended regular reunions of former soldiers in ARVN, the acronym of the army of the then-former South Vietnamese army, at which the men, many of them still struggling to learn English and find work, stood to sing the national anthem of a nation that now existed mostly in their memories. Folded up in my office still is the South Vietnamese flag they gave me for caring enough to write about their struggles.

When I visited Westminster, site of the largest Vietnamese community in the United States, I could see more of these men sitting idly together in coffee shops. And, although I occasionally spotted the yellow flag with red stripes of the former South Vietnam, when I explored the upscale Vietnamese shopping mall in Westminster, I could see the sons and daughters of these veterans speaking freely in English and doing all the things that teenagers did in malls during the 1980s.

Assimilation is often the ambition of the children of immigrants. In this case, the success of rapid assimilation helped the rest of us also leave Vietnam behind. And so by the time relations between that country and the United States were normalized twenty years ago, in 1995, Vietnam was well on its way to becoming a new and hip travel destination for men and women in their twenties looking for an inexpensive, exotic, and friendly place to explore.

Instead, Karnow studied comparative literature and semiotics, which she believes helped establish her artistic rigor. “At Brown I learned to be a thinker,” she says. “I learned to work really hard.” An important influence was Professor (now emeritus) of Modern Culture and Media Michael Silverman. “I learned in semiotics,” Karnow recalls, “that the only thing that really matters in your art is the piece of art itself. It doesn’t matter what your intention was, or what the history of the work is, for example. The film, the image, has to stand on its own.” She adds that one other Brown characteristic has guided her: “I am insistently independent as a photographer.”

Although Karnow began her photography career in the mid-1980s, she found her subject in 1990. On June 24 of that year, her father published an article in the New York Times magazine called “Giáp Remembers,” about the North Vietnamese military mastermind, General Võ Nguyên Giáp. When Karnow’s mother saw the photographs accompanying the story, she told Catherine, “That should have been you.”

The comment resonated. “It set a fire under me,” Karnow recalls. She had already decided that it was time for her to become more ambitious and independent as a photographer, and she was looking for a project of her own. “I thought, ‘I should go to Vietnam.’”

Fortunately for her, when Stanley Karnow had traveled to Vietnam to interview Giáp, he’d been welcomed warmly by the government. When Catherine sought to photograph the general the month after her father’s article was published, the same hospitality was extended to her. She would develop a close relationship to Giáp and his family, traveling with him to Dien Bien Phu and eventually photographing his funeral in the fall of 2013.

As soon as she entered the country, Karnow says, she felt as if it was a kind of homecoming. “In Vietnam,” she says, “I was finally feeling and seeing my Asia. It immediately felt deeply familiar.”

Over the next twenty-five years, Karnow would return there again and again, building a body of work that evolved along with the country. “Any country that has been shut behind an Iron Curtain and that starts to emerge to the outside is always fascinating,” she says. “But in Vietnam I felt I somehow recognized myself in the faces of the people, recognized a feeling of longing and nostalgia. As an American, whether I am in the north or the south of Vietnam, I feel not just welcome, or that people are being friendly. I feel that they place so much importance on our shared history. I’m so alive when I’m there.” 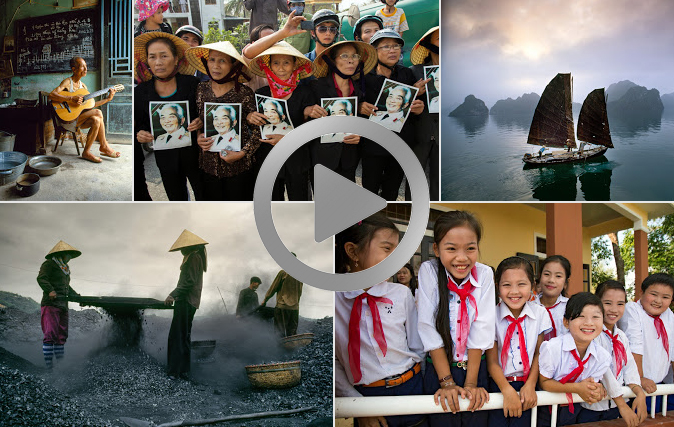 To see more of Catherine Karnow's photography in Vietnam, click the image or here.
Working on assignments for a variety of publications, or working on her own, Karnow has documented such well-known consequences of the war as children born with Agent Orange–related birth defects or the ostracized Amerasian children abandoned by the U.S. fathers who were stationed there during the war. But, when viewed as a whole, her body of Vietnam work is a chronicle of change and modernization. Early pastoral photographs and serene portraiture have given way to edgier images that focus on a people eager to become affluent members of modern culture while trying to hold on to what is essential from its country’s past.

Karnow’s method blurs the line between photographer and subject. “My photography,” she says, “is not about being an invisible photojournalist.” She takes the time to talk to the people she is photographing, and whenever possible returns to find them and give them a print of the photograph. “I try to establish long-term connections,” she says, “that sometimes develop into friendships.”

She admits that photographs revealing the underlying timeless identity of the country have become more difficult to find and shoot over the decades. “When a country is closed off from the world,” she says, “its character is palpable. It’s right on the surface. Those early pictures show that. As Saigon begins to look like a modern Asian city, it’s harder to shoot photographs containing emotion, photographs that capture the essence of the place. You’ve got to search. If you look at one of the recent images in which there are a lot of balloons, you see this blue light on the faces of vendors. Yet that same feeling, that same look of longing and pathos, the yearning captured in the early pictures, is still there, right underneath the surface, in the expression of the vendors.”

Interestingly, Karnow says, young Vietnamese have the least interest in these more recent images. “The day before I left Vietnam in January, I was working with a twenty-six-year-old Vietnamese graphic designer on the catalog for my show in Hanoi. He, like many of his generation, is very drawn to my older photographs and is not particularly interested in my new photographs of things like rich suburbs. ‘What’s so special about these photos that you want them on the wall of an exhibit?’ this designer asked me.”

Karnow believes that to truly understand Vietnam you need to view both kinds of photographs. Even the Vietnamese can over-romanticize the country. For example, Karnow points out, the disparity between rich and poor is growing more pronounced, which reduces access to services. The press is tightly controlled, and dissidents must surreptitiously use the Internet to get their messages out, always risking prison. “You’ve got to be clear-headed about Vietnam and the Vietnamese people,” Karnow says. “There’s a lot going on under the surface that’s not very pretty.”

Even as she assembles twenty-five years of photographs, Karnow shows no sign of tiring of her subject. “Every day is a fascinating experience for me in Vietnam,” she says. “Absolutely magical things happen. When I am there, Vietnam is a home for me, and the Vietnamese people are a family for me. When I go there, I feel at home. I stay in the same room in the same hotel in Saigon and in Hanoi year after year. I know more people in Vietnam than I know in the rest of the world combined.”

“Vietnam 25 Years: From Darkness into Light,” an exhibition of Catherine Karnow’s photographs, is at the Foreign Correspondents’ Club in Hong Kong during the month of March. A larger retrospective will open at the Art Vietnam gallery in Hanoi April 10. Her photos can be viewed at thephotosociety.org/member/catherine-karnow. She will be offering her Photo Workshop, open to all levels of photographers, in Italy May 6-16. Find details at catherine-karnowphotoworkshop.com.
What do you think?
See what other readers are saying about this article and add your voice.

Reader Responses to Vietnam Through a Lens