“The odd couple.” “Strange bedfellows.” These are some of the epithets David Boies and Theodore Olson received when the duo—who were opposing counsel before the U.S. Supreme Court on Bush v. Gore—joined forces against a common enemy: the ban on Caifornia’s same-sex marriage ban. 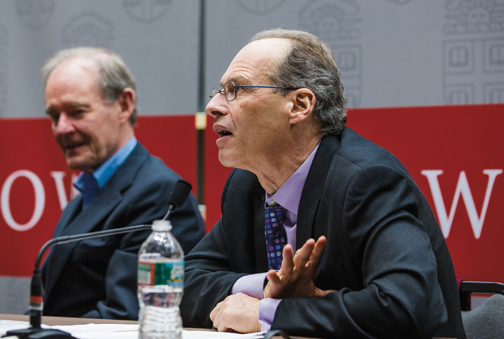 Boies and Olson were on campus in March to discuss their success in overturning the 2009 California ban in the Supreme Court case Perry v. Schwarzenegger. Their lecture, sponsored by the Taubman Center for Public Policy, brought a packed audience to MacMillan Hall, and was received with a standing ovation.

Although Olson quipped that their wives “weren’t too happy about the ‘strange bedfellows’” moniker, he stressed that the dissolution of their high-profile rivalry in Bush v. Gore was essential to their ability to frame the public’s perception of the issue as a moral obligation that rises above political partisanship.

Olson, especially, sought to use his well-known conservative pedigree to the plaintiffs’ advantage: “I felt if we could assemble a legal team from opposite sides of the political spectrum,” he said, “we could present a message that this is not a Republican or Democrat issue—it’s a human rights and decency issue.”

In addition to legal work Olson and Boies put into the case, Boies said, the cause rested on decades of legal progress, “decades of changing the mindset of this country about discrimination.” He added that 75 to 80 percent of Americans below the age of thirty now favor marriage equality.

Boies attributed this trend to the increasing visibility of people with diverse backgrounds and sexual orientations. “Generations are now growing up exposed to people of different genders, races, religions, and sexualities,” he said. “And when you know that everyone shares the same basic value and same basic humanity, it becomes impossible to tolerate stereotypes and discrimination.”

Reader Responses to “I Do” for All