Ibis in a Box

One of the challenges facing archaeologists analyzing mummified remains is how to examine them without destroying them. 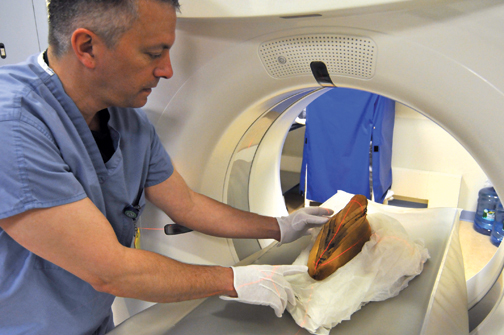 Frank Mullin
Scott Collins carefully positions the ibis mummy before sliding it into the CT scanner at Rhode Island Hospital.

Julia Troche, a graduate student in the department of Egyptology and Assyriology, knows this well. In March, she held in her hand an ancient Egyptian mummy in a container about the size of a bread basket. The mummy was believed to be that of an ibis, a bird that represented Thoth, the god of wisdom, knowledge, and writing.

Starting in the sixth century BCE, wealthy Egyptians were buried near such creatures, which, it was thought, could be offered to the gods as gifts.

But was the mummy, which belonged to the Joukowsky Institute for Archaeology and the Ancient World, really an ibis? Troche feared that opening the box to find out would ruin the mummy.

Enter Scott Collins and Derek Merck. Both men are imaging and scanning specialists at Rhode Island Hospital, which regularly uses CT scans and MRIs as diagnostic tools. Troche and archaeology PhD candidate Jen Thum wondered what these techniques might reveal about their mummy. They secured funding and scheduled a mummy CT scan.

Collins and Merck, along with radiologist John Cronan, got to work. “It was super easy,” says Collins, who is the senior CT scan technologist for Lifespan hospitals. The machine takes cross-sectional photographs, each about .3 millimeters thick, then stacks them to produce a two-dimensional image. After only a few minutes the men had assembled the image of a complete ibis skeleton. Collins then created a three-dimensional computer model of the mummy that in June, along with the actual mummy in its container, will be part of a campus display of forty ancient Egyptian artifacts.

The CT scan image also gave Troche and Thum a look at the linen wrapping the ibis. Its style suggests it was done during the Roman period in ancient Egypt (31 BCE to around 400 CE). They also could see that the bird had not been stuffed. Troche says this may mean that the artifact is of lower quality than other animal mummies, which are typically filled to slow decomposition. Or, she says, the lack of stuffing may represent a regional variation in technique.

Reader Responses to Ibis in a Box