Some people are late finding their true calling. Take Susanna Carter ’99. Following her mother and sister to College Hill, she earned her undergraduate degree in history, participating in a handful of student activities along the way, including a year of rowing. She ran and she biked. 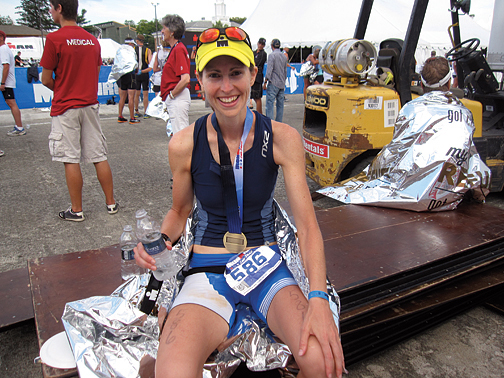 After graduation, she went on to medical school in her home state, attending the University of Alabama at Birmingham and completing a residency at the University of Tennessee at Chattanooga. (She competed in an Ironman triathlon as a third-year resident.) Then she began to practice as an obstetrician/gynecologist in Alabama.

Two years later, in December 2013, she realized that something wasn’t right.

She says she was working long hours, not getting enough sleep, and not putting in the time to eat properly. “I was feeling chronically stressed, rushed, behind, sleep deprived, frustrated with the medical system,” she says. “I was constantly in this vortex of stress and fatigue. I was not living a healthy lifestyle—ironically, in medicine—and also maybe not fulfilling my need to help people do the same. I needed to step back for my own health and happiness.”

Carter had an epiphany after reading the 2009 book Exercise Is Medicine: A Clinician’s Guide to Exercise Prescription, which describes the American College of Sports Medicine’s efforts to “make physical activity and exercise a standard part of a disease prevention and treatment medical paradigm.” The book led to a global initiative encouraging physicians to include an exercise component in their patients’ treatment plans. As a physician, Carter believed that a greater emphasis on exercise, nutrition, and fitness would help her patients get and stay healthy. As an individual, she had found her calling.

“The book is a call to arms,” she says. “It is a call for physicians to start writing prescriptions for exercise. I read this book and thought, ‘This is what I need to be doing—preventative medicine. That is what I am passionate about.’” she said. “I came up with this basic premise that people should be getting 150 minutes of exercise a week plus two strength training sessions.”

Carter became an evangelist for health and fitness. (“I am a true exercise, health and wellness nutball,” she says on her website.) Rejecting the excuse used by most people that they don’t have time to exercise, she completed three more Ironmans. “If I was on call all night,” she says, “and had to work the next day, people would typically go home and sleep after that, and I would go on a six-hour bike ride. I thought, ‘I am not going to be robbed of my life. I just wouldn’t give it up.’”

She gave up her medical practice to establish Project 150 (www.projectonefifty.com), which, according to its website, aims “to reverse the sedentary epidemic and to create a community of movement.” Carter creates health-and-wellness plans and then coaches individuals and groups on how to maintain them.

Carter is sympathetic to one of the biggest obstacles to better fitness: time. Work, school, family, and other obligations can make a commitment to fitness difficult. “I really understand people’s struggle,” she says. “The key is that you are not going to find time. You have to make it. You have to rearrange your life, which is not a simple task.”
Carter says that people get overwhelmed when they feel they have to change everything at once. Her advice is to start small. “You don’t have to be perfect,” she says. “Just choose three or four habits that you want to start incorporating into your day, and it is all going to add up and you are going to be living a healthy lifestyle.”

After a year spent working primarily with individuals, Carter has once again taken stock of her situation. “I began to understand that this is a real social and cultural problem,” she says. “Our communities are not set up for fitness. They are set up for work and being sedentary.”

Fitness, she believes, is a public health issue that requires societal reforms. In July, Carter begins a two-year preventative medicine residency at the University of Colorado at Denver’s Anschutz Medical Campus to think about solutions.

“I want to continue to coach one-on-one,” she says, “but I really want to take this to the next level and figure out how to help communities develop prevention programs and start addressing this on a larger scale.”

Reader Responses to Nutball for Fitness