On May 16, 1925, 7,000 fans watched the Brown baseball team play Dartmouth on newly created Aldrich Field. Extra grandstands were quickly erected to handle the overflow crowd. The BAM estimated at the time that a thousand cars were parked in the neighborhood. Brown won the game, 3–2.

Among the fans were two inseparable brothers, Henry Aldrich 1876 and Charles T. Aldrich 1877, who had donated more than a half-million dollars to create the field and the surrounding facilities.

The fifteen-acre field, once a swamp, was an engineering marvel. “Out of a waste of woods and swamp has come one of the most modern and best-visioned athletic fields in the United States,” declared that year’s Liber Brunensis, “...with its baseball stands and diamonds, its football gridirons, tennis courts, track and its amphitheatre now rising majestically where only yesterday was a jungle!”

That same year the grounds came to include the Brown Field and the Brown Gymnasium. In 1944, Aldrich Field was temporarily repurposed into “Victory Garden” plots, on which faculty and staff raised vegetables as part of the World War II effort.

In 1961, Brown sold Aldrich Field for residential development. The Aldrich name was transferred to the new Aldrich-Dexter Field along Hope Street, which remains in use today. 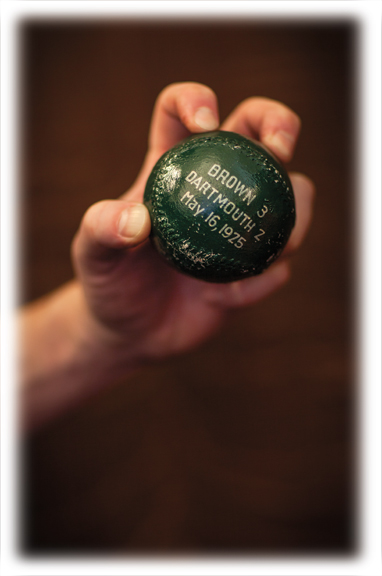