On Commencement weekend 1974, parents, students, and professors mingled on the lawn outside the anthropology department. They drank wine punch and ate strawberries. The weather was glorious. 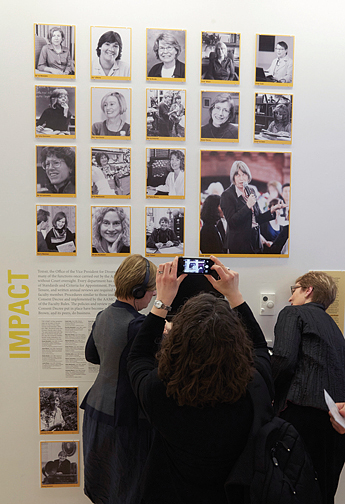 Hank Randall
Attendees at the two-day conference took in exhibits about the history of Brown's female faculty.

Louise Lamphere, the only female professor in the department at the time, asked the anthropolgy chairman, Philip Leis, if she could have a word with him in his office. She’d been denied tenure a few weeks earlier, and, when she’d tried to call administrators, she hadn’t heard back.

“I’m getting no place,” Lamphere told Leis, “so I hired a lawyer and I intend to sue.”

The Lamphere Case, as it became known, forever changed the way Brown hires and grants tenure to female faculty. In early March the Pembroke Center for Teaching and Research on Women, as its contribution to Brown's 250th anniversary celebration, hosted “Exploring the Legacy of Louise Lamphere v. Brown University,” a two-day event at which Lamphere recalled her struggle and panelists explored the role of women in higher education.

Lamphere, who grew up in Colorado as part of a Republican family, arrived at Brown in 1968 as an antiwar activist who’d begun participating in feminist consciousness-raising groups. That’s when things got a little uncomfortable in the anthropology department. “It was all very collegial,” she recalled, “until I became a feminist.” She said her colleagues objected in particular to her focus on women in her classroom teaching.

Nevertheless, she assumed that getting tenure “was going to be a slam dunk.” She had published papers in prestigious academic journals and her book on Navajo culture had been accepted for publication. Instead, she recalled, she was informed there were “serious questions about my teaching.” At the time there was no system of formal teaching evaluations. “They were evaluations by rumor,” Lamphere said. The entire tenure process was ill-defined, based on word of mouth, and inconsistent. Other colleagues objected to her increasing focus on women’s issues. There’s a “narrowness of her perspective,” one tenured professor wrote, and she’s teaching “kinship and social structure with a focus on militant feminism.”

In 1976, her court case was certified as a federal class action suit, and three more female Brown professors who had been denied tenure also became plaintiffs. The University responded by fighting their attempts to obtain records and relevant correspondence among faculty members until the judge held Brown in contempt. Once released, the letters revealed that academic sexism was commonplace. This is how one professor wrote about the female graduate students in the department: “Speaking objectively, none of them have boobs worth talking about.”

Before the class action suit could be resolved, Howard Swearer, who became Brown’s president in 1977, sought an out-of-court settlement. The University soon signed the so-called Lamphere Decree, admitting no wrongdoing but committing to increasing the number of female tenure-track faculty members. It also called for a formalized, written tenure evaluation system and required that an affirmative action committee review all new male faculty hires.

The decree lasted through the 1991–92 academic year, at which point the female faculty had increased fivefold.

Lamphere, one of those granted tenure, taught at Brown until 1986, when she moved to the University of New Mexico. She said that even then she’d felt a certain coldness from her colleagues and had concluded that she would likely never rise through the academic administration at Brown. Nevertheless, in 2008 she donated $1 million to the University to establish a visiting professorship in anthropology and gender studies.

At another panel during the conference, four former and current female University presidents discussed the pitfalls and pleasures of being a woman in charge of an institution of higher education. All four leaders said that today the differences between male and female leadership were slight. “On average, women are more likely to lead by consensus building rather than command and control,” Shirley Tilghman, former president of Princeton, said. “It’s culture, the way we are raised."