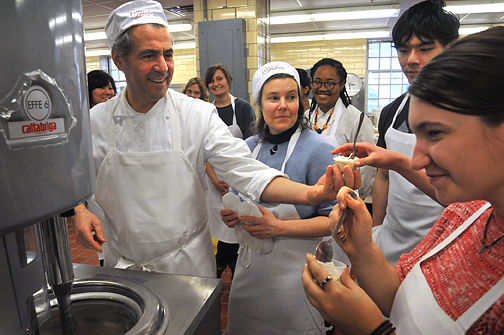 She and her husband, gelato maker Gianni Figliomeni, own a shop in Bologna, Italy, called Il Gelatauro, a play on the Italian word for “minotaur.” Though his confection is renowned in Italy, its stateside debut came on March 16 in the Ratty Bakeshop, where he and Lorenz gave a three-day series of master classes to a small group of students.
Lorenz was the “ringleader,” she said, interpreting Figliomeni’s soft-spoken Italian and detailing the quality of his ingredients. As Figliomeni poured them into his Cattabriga ice cream machine—a $40,000 behemoth that Lorenz dubbed the Mercedes-Benz of its kind—she recounted how just days earlier, facing the machine’s delayed arrival, Figliomeni had resorted to heating his product “nineteenth-century-style” in a steam cauldron from the old Pembroke campus.

The gelato, which was distributed outside the Perry and Marty Granoff Center for the Creative Arts, was part of a celebration of Italian film. Screening inside the Granoff
Center was a selection from Il Cinema Ritrovato, one of the world’s most important film-restoration festivals  (ritrovato means “rediscovered”).

The festival, which is held yearly in Bologna, pays homage to forgotten films, primarily from a century or more ago. Figliomeni has served his gelato for four years at Il Cinema Ritrovato, and this is the second year that the chair of the Italian Studies department, Massimo Revi, has brought a sampling of the festival’s 300 films to Brown. This year they came with gelato.

In keeping with the festival’s theme of rediscovery, Figliomeni drew his recipes from a gelato book published in 1911. Lorenz stumbled upon it years ago in an antique bookstore, finding it rich, she says, in “hysterical flavors from a man who had a great sense of humor and pride in his work.” Figliomeni recreated three of its less hysterical sorbets—coconut, nougat, and chocolate, all containing 100 percent dark chocolate nibs—and a cream gelato flavored with caramel and hazelnut.

Returning to the Ratty after so many years held a special meaning for Lorenz, who said, “It’s definitely been a full-circle experience.”

But this time around, the job came with an added perk: “I get to be the taste tester.”

Rising to the challenge of a pandemic
Ever True

Reader Responses to The Scoop