After graduation, Hind Makki ’01 worked at a Muslim bookstore in Chicago. There she began the work of putting her international relations degree to good use by trying to get a job in the field of conflict resolution for an NGO in Africa. 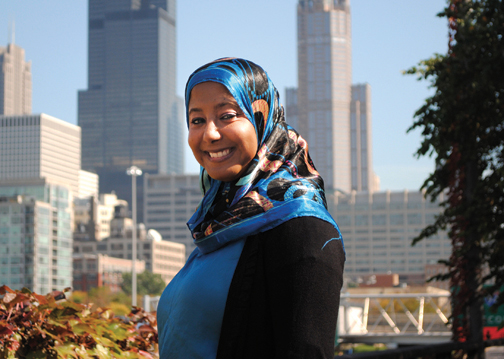 Those plans changed on September 11, 2001, when four hijacked airliners transformed the world as she knew it. That same day more than 300 angry protesters vandalized Muslim-owned businesses in Chicago and marched on Makki’s suburban Chicago mosque. Area Catholics ringed the building and held off the mob until police arrived.

For Makki, a devout Muslim and the American-born daughter of Sudanese immigrants, “that was a huge defining moment for me. It blew my mind. I did a lot of interfaith stuff at Brown, and I loved it, but I didn’t know how it could be applied in the real world.” She reconsidered her immediate future. “I thought, ‘Who am I to think I’m going to go to Sudan to bridge communities, when I don’t even know my neighbors here?’ Here were people from a different faith who shared common values with us, and we were all Americans.”

Since that day, she has traveled the United States and Europe to lead interfaith dialogue. Similarly, since 2012 she has been writing “Hindrospectives,” a prominent blog for the faith-based Internet site Patheos, which bills itself as a provider of “balanced views of religion and spirituality.”

In her blog, Makki isn’t afraid to take on controversial subjects within Islam (she’s railed against the little-discussed practice of forcibly keeping women from praying in mosques), but she’s more interested in portraying Muslims, Western Muslims in particular, as something other than caricatures.

“Most Americans don’t know a Muslim personally,” she says, “and they receive their news about Muslims through the media, which have their own meta-narrative that they like to portray, for whatever reason. I’m more interested in humanizing Muslims here in America and other parts of the Western world. We’re essentially as American as apple pie, or as American as bean pie.”

Her February 26 blog focused on the three Muslim victims who had been gunned down in Chapel Hill, North Carolina, earlier that month. “In a country where an elected official can publicly declare ‘Islam is a cancer in our nation that needs to be cut out,’ without any substantial pushback,” she wrote, “the typical American Muslim is the one not portrayed by the media, but exemplified by the Chapel Hill victims: Deah, Yusor, and Razan lived lives that seamlessly integrated their religious faith, cultural heritage, and American nationality.”

Makki prays five times a day; tries her best to live out the Five Pillars of Islam, which include fasting in the month of Ramadan and making a pilgrimage to Mecca; and wears a hijab, or headscarf.  “I really believe in the power of stories,” she says, “and what I like to do with my blog is share those stories, share one perspective on issues that I think most Americans care about: race, religion, faith, and national identity. What does it mean to be an American in the aftermath of 9/11? I’d like to insert some nuance into the conversation and make people understand that the angry Muslim guy you see on TV half a world away is not your neighbor.”

Reader Responses to Who We Are