Women A to Z

Imagine a children’s alphabet book in which A is for Angela Davis, B is for Billie Jean King, C is for Carol Burnett, and D is for Dolores Huerta. That’s what Kate Schatz ’05 MFA does in Rad American Women A–Z: Rebels, Trailblazers, and Visionaries Who Shaped Our History…and Our Future. “The hardest part was getting it down to only twenty-six,” Schatz says. “There are so many incredible women who have impacted American history.” The list also includes Patti Smith, Rachel Carson, Sonia Sotomayor, and Zora Neale Hurston. Schatz came up with the idea for the book, which features bold illustrations by Miriam Klein Stahl, when her daughter was two. “She’s such an amazing kid,” she says, “and I want her to grow up to be empowered and strong and inspired.” Schatz is also the author of Rid of Me: A Story, a book of fiction inspired by PJ Harvey’s 1993 album of the same name. Schatz is chair of the School of Literary Arts at Oakland School for the Arts, where she teaches fiction, poetry, and journalism. 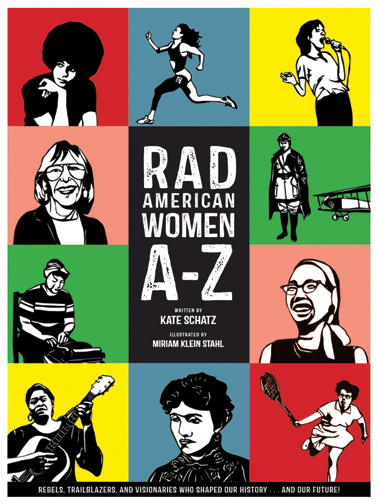 Reader Responses to Women A to Z