“I think there is something Dutch about the way I live,” Walter Liedtke ’69 AM once said. “To go home every day from the Upper East Side of Manhattan to the countryside is a really nice contrast.” Liedtke, who spent the last three and half decades as a curator of European paintings at the Metropolitan Museum of Art in New York City, commuted daily between the museum and his home in Bedford Hills, N.Y., often sitting in the first, and usually quietest, car of the Metro-North train, where he could more easily read and work. On February 3, Liedtke was one of six people killed when his train collided with an SUV at a gate crossing. 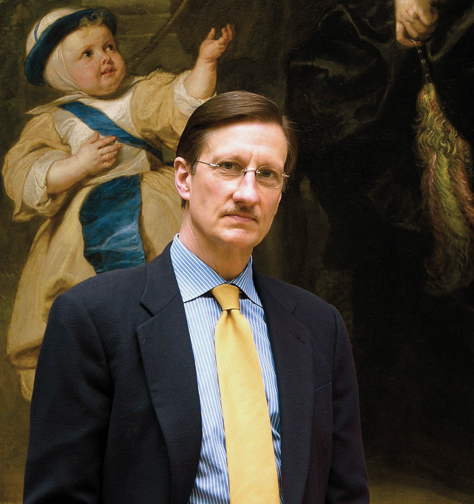 The Dutch analogy was particularly apt. As Thomas Campbell, the Met’s director, noted, Liedtke was one of the world’s leading experts on Dutch and Flemish paintings, and The Age of Rembrandt and Vermeer and the Delft School were two of his many catalogues and exhibits. “Walter was an original,” Campbell wrote on the museum’s website after his friend’s death. “Always nattily dressed, his hair just so, and his mustache perfect, he seemed to have emerged from another era rather than from an office on the second floor.”

Known for his strong opinions and his fervor for presenting them, Liedtke, who originally wanted to become a teacher, relished the opportunity to talk to audiences about art in general and European paintings in particular. “When I attended one of the European painting exhibitions at the Met,” a museum patron named Janis Landis wrote on the museum’s website shortly after Liedtke’s death, “I was awestruck by the placards next to the paintings— they were an amazing combination of erudition and wit.… And so I wrote a letter of thanks, and was so pleased to get a personal letter in return, in which Mr. Liedtke commented that his wry sense of humor was very much a part of his view of life and art.” As Campbell noted, “He knew those pictures [the Met’s Vermeers and Rembrandts] like old friends, and described them with an intimacy and spirit that was mesmerizing.”

Martha Dodson, the sister of Liedtke’s wife, Nancy, wrote, “Walter was the most self-actualized person I ever knew. . . . He was a kind, generous, and thoughtful man who demonstrated his love for his fellow human on a daily basis. He had a wicked sense of humor that could make me roar with laughter.” A major reason Walter and Nancy Liedtke lived away from the city was their love of horses. They are the inspiration for his 1990 book, The Royal Horse and Rider: Painting, Sculpture and Horsemanship 1500–1800.

Liedtke earned his undergraduate degree from Rutgers, his master’s in the history of art and architecture from Brown, and his PhD from the Courtauld Institute at the University of London. He taught at Ohio State between 1975 and 1979 before arriving at the Met on a Mellon Fellowship. Eventually he was put in charge of the museum’s 230 or so Dutch and 100 Flemish paintings. His catalogue of those paintings, published in 2007, is more than 1,000 pages long. In addition to his Met publications, Liedtke wrote about fifty articles and several books, including Architectural Painting in Delft, Flemish Paintings in America (with Guy Bauman), A View of Delft: Vermeer and his Contemporaries, and Vermeer: The Complete Paintings (2008). Liedtke was named Knight in the Order of Leopold by King Albert II of Belgium, and Officer in the Order of Orange-Nassau by Queen Beatrix of the Netherlands. He is survived by his wife, Nancy.

Reader Responses to Art and Humor