One summer while a student at Brown, Nicholas Hilton ’15 worked in the R&D lab of a major soft drink company. “They wanted,” he says, “an objective way of determining sweetness and bitterness and other tastes as opposed to just having a team of taste testers give their subjective opinion.” So he spent his days looking through a microscope, trying to determine how many taste receptors reacted to various levels of sweetness. “It was interesting,” he says. “I really enjoyed it. Day to day, it was fascinating science. But I was looking for something . . . a little more.” 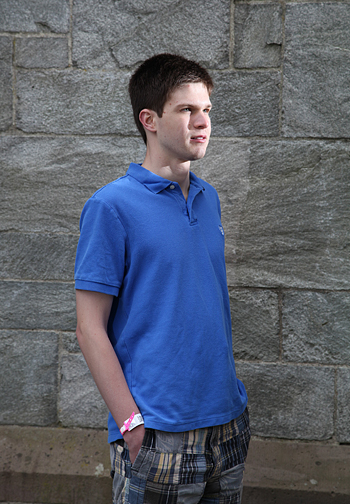 Dana Smith
"I like the idea of being able to choose," Nicholas Hilton ’15 says of his time at Brown. "I had the option to spread out and almost artificially construct a common core, and I could tailor that the way I wanted."
Hilton was no stranger to concocting test-tube beverages. In high school in Fairfield, Connecticut, he came up with an unusual project for a science fair: making moonshine. He had read a paper about using an electric field to speed up the metabolism of a bacteria, so he decided to put his own spin on the experiment by substituting brewer’s yeast. With a teacher’s help, he obtained a power source and put together an apparatus with copper plates attached to wires. “I tested different levels of electric fields,” he recalls, “and measured the alcohol production as a proxy way of measuring the metabolism of the yeast. In the end, I found that a certain amount of electric field boosted the alcohol production, but, if you really cranked it, it had a negative effect.”

With that kind of an analytical mind, it’s not surprising that Hilton’s interest in science took hold at a very young age. In middle school and high school, he zeroed in on biology, but when it came time to choose a college, he looked for a place that would not restrain his wide-ranging curiosity. Brown’s flexible curriculum was a big draw.

“I like the idea of being able to choose,” he says. “I had the option to spread out and almost artificially construct a common core, and I could tailor that the way I wanted.” He joined a genetics lab in his sophomore year, then switched to an immunology lab the following year. There, under the direction of Professor of Pathology and Laboratory Medicine Jonathan Kurtis, and, with the help of a Royce Fellowship, he found his “a little more”: he worked on a malaria vaccine.

In his senior thesis, Hilton explains that “malaria is one of the deadliest diseases humanity currently faces, afflicting nearly 200 million people. . . . Additionally, children under five years old account for 78 percent of all malaria deaths in Africa.” Professor Kurtis and his colleagues, he says, had identified a group of children in Tanzania who had antibodies to certain malarial proteins. Researchers in his lab are trying to utilize these proteins to block the malaria parasite from leaving red blood cells, thus allowing the body’s immune system to destroy it. Hilton’s contribution to the research, the subject of his thesis, was to investigate one of these proteins further, using the process of phosphorylation to try to determine how the protein could be activated or deactivated. If the vaccine is ever adopted, Hilton will know he played a role in helping those child victims of malaria.

Hilton plans to work in another lab for a year or two—he hopes on an infectious disease—before applying to PhD programs. His ultimate goal is to become a researcher and to teach at an academic institution.

Reader Responses to A Malaria Vaccine