Without a Lot of Stuff

When G. Maris Jones was ten, her dance teacher in New Orleans, Valerie Wilson, took a job at Brown as an administrator. (Wilson has since left.) Jones was sad to see her move away—“She’s a person I trusted and admired extremely,” she says—but soon a gift arrived from Rhode Island. It contained some Brown paraphernalia, a picture of former president Ruth Simmons, and information about the department of Egyptology, which was Jones’s favorite subject. It was enough for Jones to decide she wanted to go to Brown. 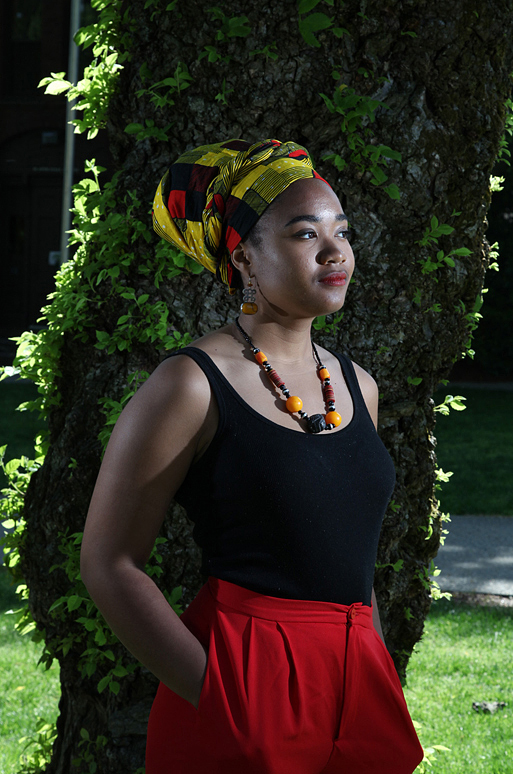 Jones’s childhood dream came true, but not until she’d been forced to endure a nightmare. When Hurricane Katrina struck New Orleans in August 2005, Jones and her family evacuated in their car. They spent twenty-four hours in traffic on the road to San Antonio, Texas. Word arrived that their one-story home was beneath nine-and-a-half feet of water. “My family lost everything,” Jones says. Her parents didn’t want their kids exposed to the chaos and devastation back in New Orleans, so for several months Jones lived with her grandparents in the Bahamas. Her mother, a clinical nurse specialist, had emigrated from there almost twenty years earlier.

After Jones returned from the Bahamas, she lived in an apartment with her family while they literally rebuilt their house. She picked up a lot of construction skills, she says, but also something more. “It empowered me,” she says. “I learned that things are not important. People are important. You can survive without a lot of stuff.” When, to unburden her family’s finances, she considered other options besides Brown for college, both her parents nudged her back toward Providence. “It was your childhood dream,” they reminded her.

After getting settled on campus her freshman year, Jones started an Afro-Brazilian drumming group called Bloco da Brown. Blocos are the street bands that play in Brazilian carnivals.

Every Sunday, roughly a dozen students came together to play. “There’s something about it I really identify with,” Jones says.

She concentrated in both anthropology and Portuguese and Brazilian studies. In her sophomore year she received a Mellon Mays Undergraduate Fellowship, a national award given to members of underrepresented groups committed to pursuing a PhD. She traveled to Brazil for the fall semester of her junior year and then in the following summer to conduct research for her senior thesis.

The thesis focused on the role of the arts in black youth political movements during the 2013 FIFA Confederations Cup and the 2014 FIFA World Cup, both of which were held in Brazil. Brazilians in their late teens and early twenties faced a crackdown by military police when they tried to use the world spotlight to raise awareness about a number of social causes. The protesters responded to the crackdown by incorporating Afro-Brazilian percussion music into their protests.

“In Brazil,” Jones wrote in her senior thesis, “celebration and resistance often seem to go hand in hand,” Jones will spend the next year in the Episcopal Service Corps working at a retreat center and camp in Hawaii. She then hopes to earn a degree in environmental anthropology.

A single dad and a U.S. Navy veteran of nuclear submarines, Matthew Ricci ’15 is not your typical Brown student.
What do you think?
See what other readers are saying about this article and add your voice.

Reader Responses to Without a Lot of Stuff