While at Brown, Louella Hill ’04 was a crusader for small farms, working with dining services on buying more local food. Now she’s a crusader for cheese. Hill (a.k.a. The Milk Maid) teaches classes on cheese making in San Francisco, is president of the California Artisan Cheese Guild, and has written Kitchen Creamery, which was published in April by Chronicle Books. After starting with the basics—making yogurt, ricotta, and mascarpone—the book works up to such complex cheeses as asiago and pecorino. Hill’s hard-won knowledge comes from numerous stints at dairies, including the Narragansett Creamery in Providence, which she helped found. The book’s introduction describes her initiation in Italy: she was working at an agriturismo in Tuscany when she answered a call for extra help from the dairy next door. “The moment I walked into that milking parlor and saw the muddy backsides of those Sarda sheep,” she writes, “I knew it was destiny.” 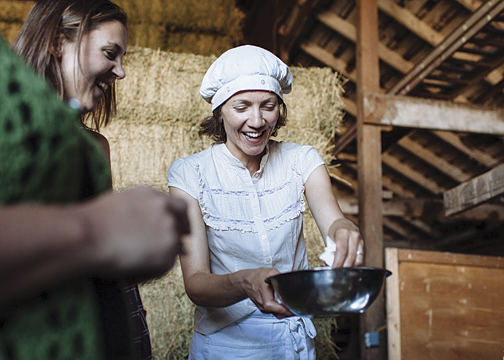 Reader Responses to Cheese It