Everyone has a dream. For Emily Bourdeau ’10 it was competing in the Olympics. So she started running and became a Massachusetts high school state champion competing in the 800-meter event. She kept it up during her first year at Brown—until she got injured. 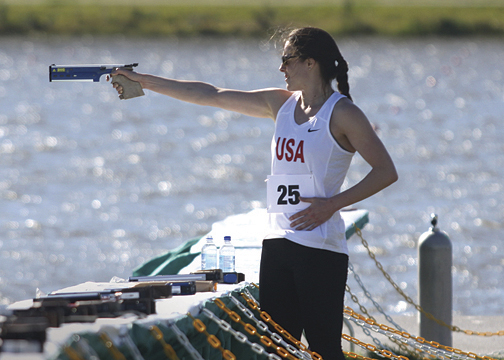 Brad Davis
In February, Bourdeau competed in the modern pentathlon World Cup competition in Sarasota, Florida.
“It quickly became apparent,” she says, “that I was not going to make it in track.”

So she joined the equestrian team, competing during her next three years on campus. But becoming an Olympian in that sport requires a huge financial commitment, and Bourdeau didn’t have that kind of money. So how could she keep her dream alive?

“It became this athletic crisis,” she says.

After graduating with a degree in environmental studies, Bourdeau went to graduate school at Columbia and began running with Colleen Brogan ’10, who was also on the track and equestrian teams at Brown. Brogan told her friend about the modern pentathlon, which combines fencing, swimming, show jumping, pistol shooting, and running.

“We already have two of the five sports,” Brogan said. “We should definitely see if we can do this.”

“I just fell in love with the idea,” Bourdeau says. “My dream was re-awakened.”

She searched for a fencing coach, a shooting coach, and a swimming coach. She persuaded a friend who is an FBI agent to teach her pistol shooting and sighting targets. Eventually she met with Michael Aufrichtig, head coach of Columbia’s fencing team. He recommended she also talk to Aladar Kogler, a seven-time Olympic fencing coach and a member of the U.S. Fencing Hall of Fame. “I got pretty lucky to become his student and learn fencing from the ground up from one of the best coaches of all time,” Bourdeau says.

As if Olympic training for one sport wasn’t enough, Bourdeau is working on five, each requiring different skills. She also works full time as an assistant vice president at the professional services firm Marsh & McLennan Companies, which is headquartered in New York City. Bourdeau gets up at 5:30 a.m. to swim before work. After the workday is over, she returns to training. Some nights she runs on the track, then swims some more, and ends the workout with some shooting. Other nights she squeezes in fencing practice between running and swimming. She rides in Connecticut on weekends.

Brogan, who still trains with Bourdeau, says, “I am constantly amazed by her ability to balance training with a really rigorous and demanding job. She wakes up early in the morning for swim workouts with her boss, then leaves work every day with at least three different sporting equipment bags.”

All that training is starting to pay off. Competing in the first three U.S. team qualifying competitions this year, she notched the fifth spot on the modern pentathlon team, becoming the alternate for the World Cup. From February to May, she competed at World Cup events in Sarasota, Fla.; Rome, Italy; and Budapest.

In Sarasota, Bourdeau finished sixth among U.S. women, holding her own in swimming and fencing, two of her weaker events. She posted a personal best of 2:39 in the 200-meter swim and also earned a fencing victory over Samantha Murray, the eventual winner.

Competing on the World Cup track in Rome—the same stadium that hosted the 1960 Olympics—Bourdeau passed six people in the final 400 meters. As she was coming around the curve into the finish, Bourdeau realized, “I am beating people who have been doing this for longer than me and who train full-time. I can do this. I can get better, and I can win.” In May, she finished third at the Pan American Cup held at the U.S. Olympic Training Center in Colorado Springs, Colorado.
By doing well in these competitions, Bourdeau earns points toward participating in such higher-level international competitions as the Pan American Games this July, the 2016 Olympic Trials in Florida, and, eventually, the Olympics. She is ranked 161st in the senior women’s world rankings, and ninety-seventh in the senior World Cup rankings.

“It is definitely a long road,” Bourdeau says, “but it has been so fantastic.”

She realizes there is still more work to do. She hopes to drop her swim time and become a stronger fencer and a more efficient shooter.

“Next year, I want to compete in the trials,” Bourdeau says. “I want to go as far as I can go.”

This profile is part of a continuing series about alumni in sport.

Reader Responses to Dreams of Gold